According to Advanced Geology,Cosmology and Astronomy, the Universe is Cyclic.

That is, the events ,both terrestrial and celestial happen in a Cyclc order, that is happen again over and over .

This happens over last stretches  of Time.

That is in Millions of Years Ga.

So is Time,as Space and Time are inter changeable and Space is curved as also Time.

Both are beyond Time, that is immeasurable.

Space is Time and Tume is Space.

Hinduism, through the Vedas, the Scripture of Hindus and Puranas, ancient History of Hindus assert these facts. 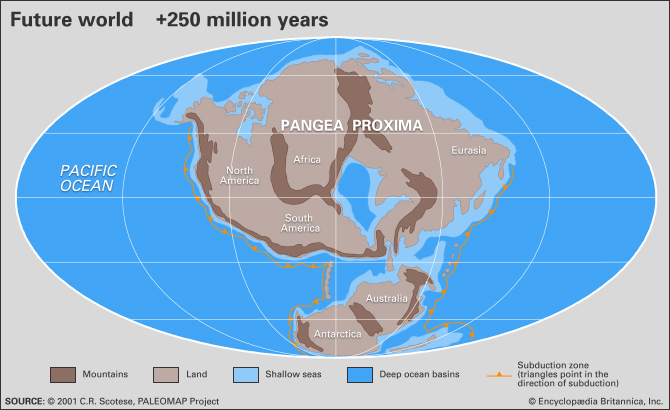 Now Time as Cyclic has been validated by Quantum Theory.

As to The Concept that physical events happen in cycles is validated buy Super Continental Cycles Theory.

The Puranas, especially the Vishnu and Brahmanapurana describe the same details- in fact with more detail and clarity.

The Super Continental Cycle Theory states that the first landmass was Pangea and after undergoing several changes,including the present landmass will once again form Pangea.

And this Cycle will be repeated.

‘During Earth’s long history, there probably have been several Pangea-like supercontinents. The oldest of those supercontinents is called Rodinia and was formed during Precambrian time some one billion years ago. Another Pangea-like supercontinent, Pannotia, was assembled 600 million years ago, at the end of the Precambrian. Present-day plate motions are bringing the continents together once again. Africa has begun to collide with southern Europe, and the Australian Plate is now colliding with Southeast Asia. Within the next 250 million years, Africa and the Americas will merge with Eurasia to form a supercontinent that approaches Pangean proportions. The episodic assembly of the world’s landmasses has been called the supercontinent cycle or, in honour of Wegener, the Wegenerian cycle (see plate tectonics: Supercontinent cycle)…..

‘passages as the following as intending the production of the chief principle (Pradhána). “There was neither day nor night, nor sky nor earth, nor darkness nor light, nor any other thing, save only One, unapprehensible by intellect, or That which is Brahma and Pumán (spirit) and Pradhána (matter) ” The two forms which are other than the essence of unmodified Vishńu, are Pradhána (matter) and Purusha (spirit); and his other form, by which those two are connected or separated, is called Kála (time) .When discrete substance is aggregated in crude nature, as in a foregone dissolution, that dissolution is termed elemental (Prákrita). The deity as Time is without beginning, and his end is not known; and from him the revolutions of creation, continuance, and dissolution unintermittingly succeed: for when, in the latter season, the equilibrium of the qualities (Pradhána) exists, and spirit (Pumán) is detached from matter, then the form of Vishńu which is Time abides ‘ ( Vishnu Purana ,Canto 1,Chapter 2)