The length to which Christians,Jesuits can go to propagate Christianity is amazing.

Christianity was used as one of the tools used divide Indians.

The other tools being translating Vedas and Indian texts with subtle yet misleading facts;learning of Indian Languages like Tamil by Caldwell;Introducing the concept of Christianity subtly in ancient Indian Regional texts;Introduction of the concept of Aryan Dravidian divide;luring scholars with money,posts……..

One other lowliest form at seeking legitimisation of Christianity by writing a Fake Veda in French by incorporating the idea that Christianity was foretold in the Vedas.

French Writer and Revolutionary Voltaire was given a copy of Ezourvedam and he was charged with the task of publishing it.

It is a different matter that Voltaire praised Hinduism later. 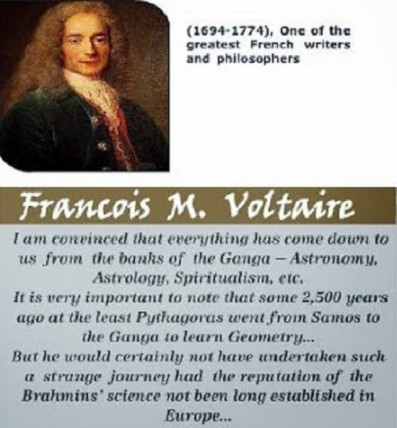 ‘The Ezourvedam is a forgery “consisting of certain ‘Vedic’ materials translated by Jesuits with the intention of isolating elements most in harmony with Christianity.”

..A manuscript called Ezourvedam was given to Voltaire in 1760 by Louis-Laurent de Federbe, Chevalier de Maudave. The text was in French, and said to be a French translation of a Sanskrit original. Voltaire was enthusiastic about the work, had it copied, and brought it to the attention of others.It was first published in 1778(Voltaire died that same year). The genuineness of the Ezourvedam was first questioned in 1782; these doubts were confirmed in 1822.Rather than an original Sanskrit work, the Ezourvedam turned out to be a French text, written by French Jesuits, and meant to be translated into Sanskrit.

The name Ezourvedam was sometimes taken to be a corruption of Yajurveda, but the Ezourvedam has nothing in common with the Yajurveda. The Ezourvedam itself refers to the Yajurveda as Zozu-vedam. “Ezour” is the sandhi-form of “Ezous-“, that is, “Jezus”, based on the Latin pronunciation used by the Jesuits. The name “Ezourvedam” means something like “Gospel of Jesus”.