When people are trying to prove the birth place of Rama, many are not even aware of some other ancient Hindu Temples razed to the ground and Mosques built over them.

I have written article listing the Temples turned into Mosques.

Temples converted into Mosques A Pointer

I shall be listing the temples destroyed by Aurangzeb. the Mogul Ruler of India who is portrayed in Indian Text Books as pious Man ! 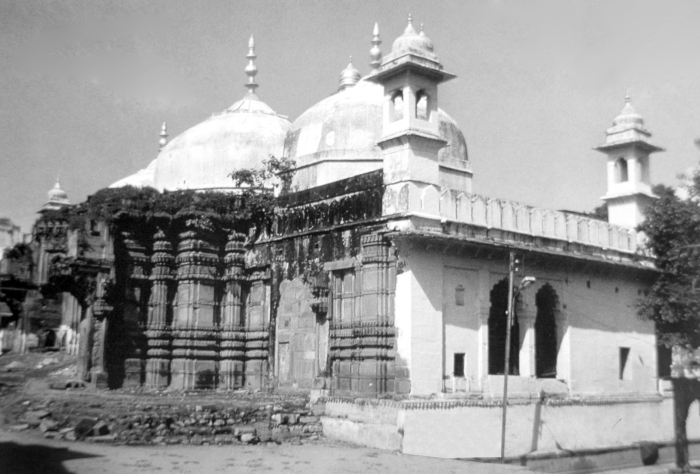 He was man who murdered his siblings and tortured His Father to Death.

This ‘pious Man’ demolished Hindu Temples and built Mosques there after  plundering the wealth of these temples and defiling the Deities.

He chose most sacred temple for his special treatment.

One such is the Kasi Viswanathar Temple, Varanasi.

This city has the unique distinction of the being the Oldest continuously inhabited city in the world!

The Gyanvapi mosque is located in Varanasi, Uttar Pradesh, India. It was constructed by the Mughal Emperor Aurangzeb, on the site of the demolished Kashi Vishwanath temple. It is located north of Dashaswamedh Ghat, near Lalita Ghat along the river Ganges.

Dashaswamedh Ghat, means the Bank of the river where hundred Aswamedha Sacrifice was performed.

It is a Jama Masjid located in the heart of the Varanasi city.

It is administered by Anjuman Inthazamiya Masajid (AIM)

The mosque was built by the Mughal emperor Aurangzeb in 1664 CE, after destroying a Hindu temple:1 The remnants of the Hindu temple can be seen on the walls of the Gyanvapi mosque.

The demolished temple is believed by Hindus to be an earlier restoration of the original Kashi Vishwanath temple. The original temple had been destroyed and rebuilt a number of times. The temple structure that existed prior to the construction of the mosque was most probably built by Raja Man Singh during Akbar’s reign Aurangzeb’s demolition of the temple was also probably attributed to the escape of the Maratha king Shivaji and the rebellion of local zamindars (landowners). Jai Singh I, the grandson of Raja Man Singh, is alleged to have facilitated Shivaji’s escape from Agra. Some of the zamindars were alleged to helped Shivaji avoid the Mughal authorities. In addition, there were allegations of Brahmins interfering with the Islamic teaching. The temple’s demolition was intended as a warning to the anti-Mughal factions and Hindu religious leaders in the city.[5]

Maulana Abdus Salam contests the claim that a temple was destroyed to build the mosque. He states that the foundation of the mosque was laid by the third Mughal emperor Akbar. He also adds that Akbar’s son and Aurangzeb’s father Shah Jahan started a madrasah called Imam-e-Sharifat at the site of the mosque in 1048 hijri (1638-39 CE).

( what an audacity? what was there before the existence of the Mosque?)

Around 1750, the Maharaja of Jaipur commissioned a survey of the land around the site, with the objective of purchasing land to rebuild the Kashi Vishwanath temple. The survey map provides detailed information about the buildings in this area and information about their ownership. This survey shows that the edges of the rectangular Gyanvapi mosque precinct were lined up with the residences of Brahmin priests.:85

Describing the site in 1824, British traveler Reginald Heber wrote that “Aulam Gheer” (Alamgir I i.e. Aurangzeb) had defiled a sacred Hindu spot and built a mosque on it. He stated that Hindus considered this spot more sacred than the adjoining new Kashi Vishwanath temple. He described the site as a “temple court”, which was crowded with tame bulls and naked devotees chanting the name of Rama.

In 1742, the Maratha ruler Malhar Rao Holkar made a plan to demolish the mosque and reconstruct Vishweshwar temple at the site. However, his plan did not materialize, partially because of intervention by the Nawabs of Lucknow, who controlled the territory. Later, in 1780, his daughter-in-law Ahilyabai Holkar constructed the present Kashi Vishwanath Temple adjacent to the mosque.

In the 1990s, the Vishwa Hindu Parishad (VHP) campaigned to reclaim the sites of the mosques constructed after demolition of Hindu temples. After the demolition of the Babri mosque in December 1992, about a thousand policemen were deployed to prevent a similar incident at the Gyanvapi mosque site. The Bharatiya Janata Party leaders, who supported the demand for reclaiming Babri mosque, opposed VHP’s similar demand for Gyanvapi, on the grounds that it was an actively used mosque.

The mosque now receives protection under the Places of Worship (Special Provisions) Act, 1991. Entry into the mosque precinct is restricted, and photography of the mosque’s exterior is banned.

Citation, Reference and Image I credit .