As one reads Indian history one is amazed at the antiquity of India and its rich culture.

The problem is that many are not aware of these facts thanks to Invaders and the manipulated History of India by them, who never seem to date anything about India before Christ and the self-styled left historians(?) of India, who have no time to check Indian sources and archaeological sites, but would accept a history of India by James Stuart Mill was by Rajaraja Chola. \nNow I find there is a Temple for Shiva in Bethuru, four kilometres from Davangere, Karnataka, on the way to Jagalur. \nThe temple is reported to have been built in the Eighth Century AD. from England, without visiting India!

I have listed the Chola temples in Bangalore with the earliest being dated at 1035 AD.

It was by Rajaraja Chola.

Now I find there is a Temple for Shiva in Bethuru, four kilometres from Davangere, Karnataka, on the way to Jagalur.

The temple is reported to have been built in the Eighth Century AD.

However on checking up, it transpires that Vijayalaya Chola built this.

‘Vijayalaya Chola was a king of South India Thanjavur( 850 – 870 CE) and founded the imperial Chola Empire.[1] He ruled over the region to the north of the river Kaveri.'(Wikipedia) 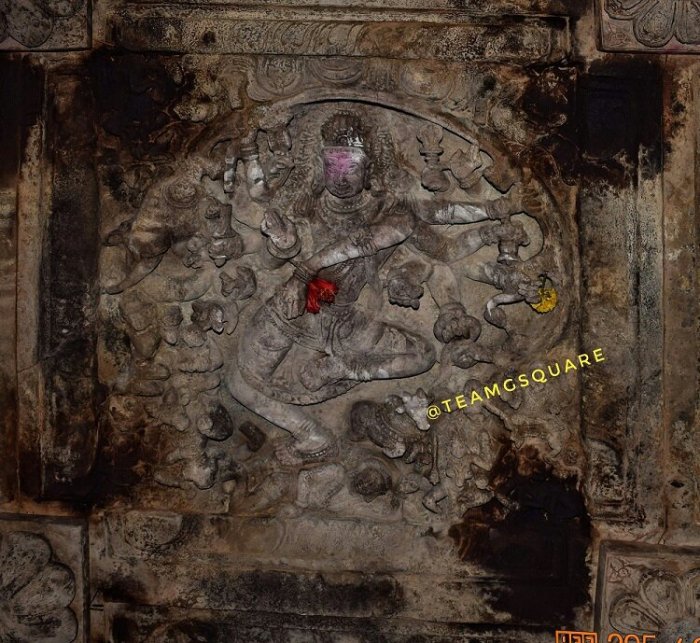 This temple was built by the Cholas between the 8th and 9th centuries, post the weakening of the Badami Chalukyas and before the rise of Rashtrakutas. Later in the 11th century, this temple under went a few additions under the Kalyana Chalukyas. Many hero-stones found here which are now kept near the temple belong to the Kalyana Chalukyas. The most pleasing sight here is that of a beautiful carving on the ceiling panel of ‘Gajasura Samara/ Gajasurasamhara’ (depiction of Lord Shiva slaying the elephant demon Gajasura) in the central portion, surrounded by the Ashtadikapalas. The temple is dedicated to Lord Shiva in the form of a Linga, with murtis of goddesses Saraswathi and Sapthamatrikas and Lord Subramanya kept in the Navaranga of the temple. The Shikara of the temple is a perfect example of early Cholan architecture. This temple definitely needs and deserves more care and maintenance in order to be preserved for future generations.‘