“In the great teaching of the Vedas,
there is no touch of sectarianism.
It is of all ages, climes and nationalities
and is the royal road for the attainment of the Great Knowledge. ” 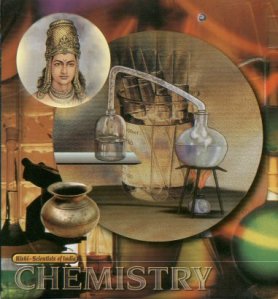 Vedas, the authority for Hinduism  speaks of Science as Apara Vidya, Transitory Knowledge, which deals with this world of Name and Forms.

Of detailed Chemical analysis and the way to treat many diseases, including Cancer.

The Siddhas are another school of Thought which throws excellent insight into Chemistry and Medicine,

Some Texts of Chemistry.

Cancer was identified and methods of Healing included total eliination of cancer, Management .handling weight loss associated with Cancer and the side effects of Cancer.

Twenty Five plants have been identified, their chemical and therapeutic  properties analysed and were used in treating Cancer.

Forms of cancer Granti and Arbuda were discussed.