The history of India is diverse.

It might appear to the uninitiated as fragments far removed from the the unity  of India, with misinformation campaign started y the British  to exercise their supremacy over their colony India and this is still being carried  out by the self styled rationalists and secularists under the myth of Reason and tolerance, to suppress the glory of Bharatavarsha.

Apart from the spiritual side one finds marvels of Architecture using far more advanced technology than what e have today, these temples support the evidence of incidents reported in the Eighteen Puranas and the Ithihasas, Ramayana and Mahabharata.

Pandavas  lived in cognito for a period of one year as a part of the agreement to reclaim their Lost Kingdom. 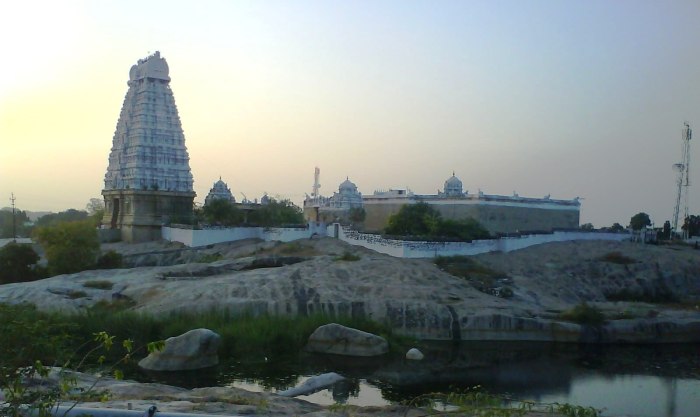 In the process they wandered the length and breadth of India, from Himalayas where they built a Temple for Shiva and there is a cave in Andhra where the hid.

They have also traveled to deep down south.

One such place where they stayed and prayed Lord Shiva for regaining their Lost Kingdom is in Araikanda Nallur, now called Arakandanallur, Viluppurm District which is about  three hours drive from Chennai.

Arakandanallur is about 28 km from Viluppuram.

Bheema is reported to have dug a Tank for Draupadi to take bath.

There is a pair of feet, reportedly belonging to Thirugnana Sambhandar.

He saw Thiruvannamalai from this spot.

Lord Vishnu as Vamana worshiped Shiva here to absolve him from the sin of  destroying Mahabali.

Lord as a Swayambu Linga is seated under a Rudraksha pandal (roof) facing west.

When saint Tirugnanasambandar came to this place, he found the temple locked by people of other faith stopping all pujas and functions.

Sambandar sang in praise of Lord, opened the doors and restored the rituals.

Both Pradosha Nandhi and Adhikara Nandhi leaned to right and left sides respectively to facilitate easy darshan of the Lord to the saint.

Even now both Nandhis are seen looking at opposite directions to each other.

The Pandavas built five rooms for themselves to stay and worshiped Shiva for regaining their Lost kingdom.

After inning the Kurukshetra war, the Pandavas visited this temple after their coronation.

Though stated to be about 2000 Years old the temple belongs to much earlier period because of the references found in Tami literature.

Tami king Paari donated lands and ornaments to this temple.

This Temple is cut into the rocks.