Ganesha is the primary Deity of Hinduism.
One may have the Trimurthis, Brahma, Vishnu and Shiva as the pillars of Hindu Dharma, yet it is Lord Ganesha who has the right of first pooja in every auspicious occasion.
He is the remover of obstacles both empirical and transcendental. 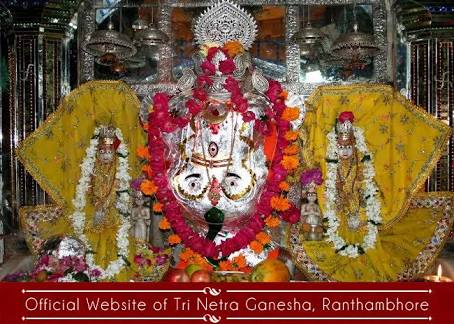 Image credit. Official website Trinetra Ganesha Ranthambore.
At the empirical level , he removes obstacles that occur and appear to be beyond one’s control.
He is the sonn of Uma, consort of Lord Shiva.
He is the nephew of Lord Vishnu and the elder brother of Lord Subrahmanya.
He is decribed as celibate in the South, though there are a few temples where He is with His two Consorts Siddhi and Buddhi.
In North India He is portrayed with Siddhi and Buddhi.
Siddhi is the personification of Spiritual attainments while Buddhi is the Discriminating organ of Humans at a higher level than Intellect.
At the transcendental level He removes ignorance and guides one in the path of self realisation.
His shape resembles OM, Pranava.
Vedas have dedicated an Upanishad to Him, Ganesha Upanishad.
He represents the Yogic principles and the Great Tamil Poetess Avvayaar had written a Yogic Treatise on Ganesha, Vinayakar Agaval.
He is the most easily accessible God.
He does not need a temple.
A Banyan Tree would do.
He can be found on the banks of rivers/tanks.
One can never find an Indian city or village without a Ganesha.
His worship is very simple.
No need for idols even.
Turmeric moulded in His shape would do.
Instead of flowers  Grass would do.
Howold is Ganapati worship?
It is older than Vedas.
His worship is found in ancient civilisations.
The oldest Ganapati temple , according to archeology, is in Tamil Nadu, dating back to 4 century AD.
Shall write on this later.
But considering the reference to Ganesha in the Vedas, Indian literature and the presence of Ganesha in ancient civilizations, there should be older temples.
Now there is ancient Ganapati Temple in Rajasthan which is reported to be 6500 years old.
Lord Krishna is said to have invited Him to attend his(Krishna’s wedding) with Rukmini.
This is the Trinetra Ganesh Temple at Ranathampore.

‘ It is believed that the temple received the wedding invite of Lord Krishna and Rukmani’s marriage some thousands years back and since then, the people send their wedding invitations to the god. Ranthambore Ganesh Temple is around 6500 years old, visited by approximately one million people over 3-4 days during Ganesh Mela, held every year during Ganesh Chaturthi.

The story of this temple goes over to the year 1299 when a war broke out between King Hameer and Ala-ud-din Khilji at the Ranthambore fortification. The war proceeded for quite a while, and the sustenance stock of King Hameer was running low. Ruler Hameer was a vigorous enthusiast of Lord Ganesha. In the middle of every issues and strains, he always remembered to worship Lord Ganesha. Ruler Hameer saw Lord Ganesha in his dream and the Lord made a guarantee to him that all the issues that he was confronting would be sorted by the morning. In the morning, a symbol of Lord Ganesha as Trinetra (three eyes) was found embossed in one of the fortification’s dividers. As guaranteed by Lord Ganesha an inexplicable occurrence happened and the war got over.’

The temple is about 12 kms from Sawai Madhopur and is well established in Ranthambhore fort.

There are mainly five types of aartis taking place every day in this well known temple – Prabhat Aarti (early morning aarti), Sringar Aarti at 9 am, Bhog at 12 noon, Sandhaya Aarti during Sunset (6:30 in the Summer and 5:45 in the winters) and Shayan Aarti taking place at 8 pm. This is a prayer Corus followed by the priests of the temple and the devotees here.

People send their wedding invitations to the god. Ranthambore Ganesh Temple is around 6500 years old, visited by approximately one million people over 3-4 days during Ganesh Mela, held every year during Ganesh Chaturthi.

You can mail your letters or marriage invitations to Lord Ganesha at the address mentioned below: