The Yadava Clan,  twenty-two in number,after the Mahabharata War, migrated towards Iran and spread to Iraq and move on to Israel before proceeding further.

In the Iranian city of Susa of Parthian period(247 BC -224 AD) was found a statue of Lord Krishna.

As to the word Parthian, one of the name of Arjuna is Partha and Krishna is also known as Parthasarathy. 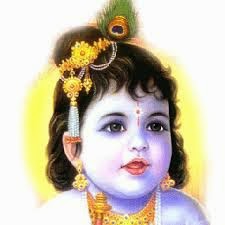 The above one is from Iraq, where a stamp was issued to celebrate the Mosul spring Festival.

In Israel there is a River Kishon.

And there is a Town called as Bal Gad.

A place in ancient Israel, Baal-Gad was a Canaanite town in the valley of Lebanon at the foot of Hermon, near the source of Jordan River. (Josh. 13:5; 11:17; 12:7) It was the most northern point to which Joshua’s conquests extended. It probably derived its name from the worship of Baal. Its exact location is uncertain, but it is generally considered to be Hasbaya in Wadi et-Teim or a site nearby.-wiki

Easton’s suggests that its modern representative is Banias. Some have supposed it to be the same as Baalbek. Others have suggested that it is the same location as Baal-hamon

The Canaanite God Thunder is Baal.

Krishna as a Child is worshiped as Balakrishna.

Is this Krishna with calf?

And Krishna is called fondly as Kanhaiya in the North.

The Canan-ite God Baal with his Calf.