I have written articles on Dravidas ,stating that,

They lived side by side the Sanatana Dharma,

Tamil King Sibi ruled from what is now NWFP in Pakistan,

Chera King Udhiyan Cheralaathan fed both the Kaurava and Pandya armies during the Mahabharatha War,

Lord Krishna attended Tamil Sangam,married a Pandyan Princess and had a daughter through her,

The children of Sage Viswamitra were banished by him to Dravida Desa,

Arjuna,Balarama and Sahadeva went on a Pilgrimage to Dravida Desa,

There was a King Aryaman whose ancestry is traced to Manu,

Cholas were cousins of Solar,Ikshvahu Dynasty,to which Lord Rama belongs,

Cholas,Pandyas are referred to in Ramayana and Mahabharatha,

Manu’s daughter was married to a Dravidian King,

Manu was from Dravida desa and he meditated near Madagascar…..

What is interesting is that Brahui language is spoken in Balochisthan even today.

And it is a Dravidian language.

How come The Dravidian languages spoken in the south of India,about 1000 miles away is being spoken in Baluchisthan?

One theory is that this Brahui was from Central India.

Does it not mean that Dravidiian languages were spoken in Central India as well?

One may have to visit the Gondwana continent concept to clarify this.

Please read my article on Gondwana.

One must bear in mind that the landmass of India and the world were different.

When one studies the Dravidian literature in conjunction with Sanatana Dharma,one may uncover shocking facts.

Looks as though the Dravidian culture preceded Sanatana Dharma.

But this theory goes out of the window because Tamil literature quotes Vedas,Puranas,Ramayana and Mahabharatha and these texts quote Tamil/s!

Add to this the excavation of a million year old site in Chennai,where traces of advanced Tamil civilization is found.

Poompuhar sites push the date of Tamils by 30,000 years.

More sites,numbering 293 in Vaigai River near Madurai confirm the antiquity as found in the other sites mentioned above.

My view on Brahui being present in Balochisthan is due to the presence of Tamils in these areas when kings from Tamil Nadu invaded them.

There are three kings who have been credited with invading North,not to speak about those who had friendly relations with the people of Sanatana Dharma.

I am researching on who the first Tamil king ,who invaded The North of India.

I am reproducing some theories,one of which suggests Dravidian Invasion of India.

Shall examine this theory as well later.

‘The Brahui (Brahui: براہوئی,) or Brahvi people are a Pakistani ethnic group of about 2.2 million people with the vast majority found in Baluchistan, Pakistan.They are a small minority group in Afghanistan, where they are native, but they are also found through their diaspora in Middle Eastern states..

Brahvi[4] /brəˈhuːiBrahui: براہوئی‎‎) is a Dravidian language spoken by the Baloch[citation needed] and Brahvi people in the central Balochistan region of Pakistan and Afghanistan, and by expatriate Brahvi communities in Qatar, United Arab Emirates, Iraq, and Iran.It is isolated from the nearest Dravidian-speaking neighbour population of South India by a distance of more than 1,500 kilometres (930 mi). Kalat, Mastung Khuzdar and parts of Quetta districts of Balochistan are predominantly Brahvi-speaking…

‘When one looks at the many similarities between certain Brahui words and words used in other Dravidian languages, the connection is clear. In addition to arisi and uru, a few more Brahui words that are clearly Dravidian in origin are listed below:

For its numbering system, Brahui draws from a Dravidian source for two (irat akin to the Kannada eradu) and three (musit akin to the Tamil moonu and the Kannada mooru) but from four onwards, the words are clearly Indo-Aryan borrowings (char, paanch and so on). The Brahui word for one (asit) seems to have no connection with any other language. Owing to its long isolation from other Dravidian languages, Brahui morphology has drawn greatly from those around it. Some experts opine that only about 15% of its vocabulary is now Dravidian, with the remaining drawn from Balochi, Persian, Sindhi, Urdu and other languages in its vicinity. Brahui’s vowel system is drawn entirely from Baloch. But experts have also noted that Baloch words, too, have been drawn from Brahui. ..

‘Some consider the Brahui tribe as a left behind relic group of the original Dravidian invaders. This view is supported by an eminent Dravidian linguist, M.S.Andronov (1980).

During the historical migration of the forebears of the modern Dravidians into India. the ancestors of the Brahuis were the first to separate from the bulk of the proto-Dravidian tribes moving to the south and south-east. “The Brahui language” [translated from the Russian by V. Korotky]. 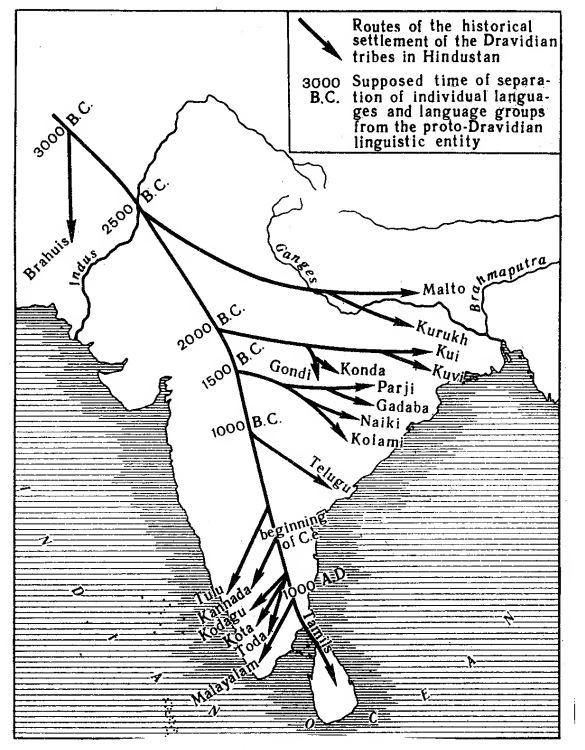 Dravidians moved from Northwest of India into India.