The presence of Bull in Hinduism is on two counts.

One is as the Mount of Lord Shiva.

As Shiva’s mount the bull is called Nandi.

There is a Huge Nandi, among other places in India, in Bangalore.

A road is also named as Bull Temple Road in Bangalore.

Another instance of buffalo is the slaying of it by Mahishauramardhini.

Tamil literature speaks of bull fighting as Jallikkattu , which is about 5000 Years old practice.

This event takes place in Tamil Nadu even today.

The Bullfighting practice has been in vogue in many ancient cultures.

The bullfighting in Spain and Latin American countries is called corrida de toros.

Lord Krishna married a  Pandyan princess, had a daughter through her, Pandya and gifted her 100 Yadava families as dowry.

Please read my posts on this.

It is probable that Krishna introduced bullfighting in Tamil Nadu and throughout the world. 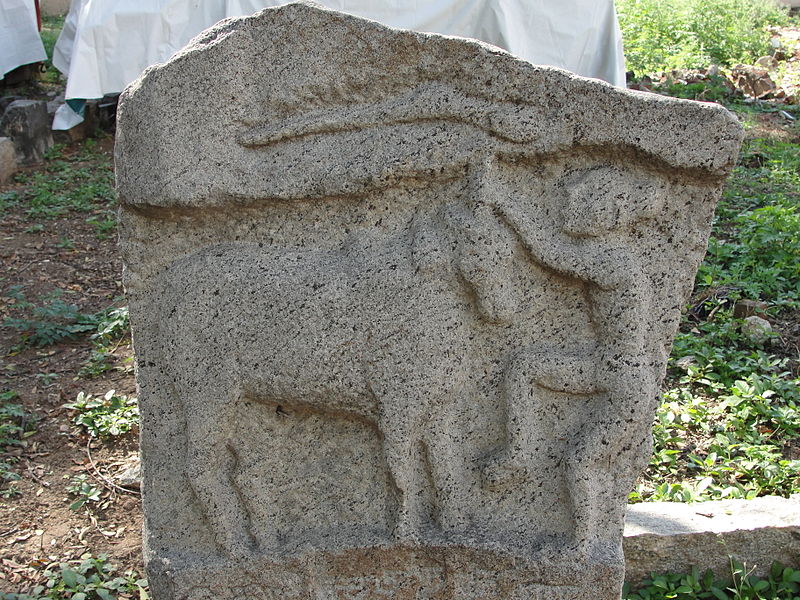 ‘Bullfighting (Spanish: corrida de toros [koˈriða ðe ˈtoɾos] or toreo [toˈɾeo]; Portuguese: tourada [toˈɾaðɐ]), also known astauromachia or tauromachy (Spanish: tauromaquia  listen (help·info), Portuguese: tauromaquia; from Greek: ταυρομαχία“bull-fight”),is a traditional spectacle of Spain, Portugal, southern France and some Latin American countries (Mexico,Colombia, Ecuador, Venezuela and Peru),[7] in which one or more bulls are fought in a bullring. Although a blood sport, by definition, some followers of the spectacle prefer to view it as a ‘fine art’ and not a sport,[8] as there are no elements of competition in the proceedings.’

The Mitanni Empire covered what is now known as Iraq, Turkey Syria, Lebanon,Egypt and included Italy.

They were the ancestors of these people.

Mitanni were the ancestors of the Egyptians as well…

These Kings and even a Roman Emperor sported Thiruman, The Vaishnavite marks on their Body.

The Sun King Akhenaten of Egypt who ruled between 1352-1336 BC was a son-in-law of Tushratta, the Mitanni king. The name Tushratta has been recorded in the Hittite cuneiform script.

Some have suggested that the Sanskrit origin of Tushratta is Dasaratha, a few others that it is Tvesaratha (having splendid chariots), a name which is attested in the Rigveda.

“The first Mitanni king was Sutarna I (good sun). He was followed by Baratarna I (or Paratarna great sun), Parasuksatra(ruler with axe),…. Saustatar (Sauksatra, son of Suksatra, the good ruler), Artadama (abiding in cosmic law)..Tushratta (Dasaratha), and finally Matiwazza (Mativaja, whose wealth is thought) during whose lifetime the Mitanni state appears to have become a vassal to Assyria”. Subhash Kak traces the ‘arna’ syllable in the names of the kings to ‘araNi’ (अरणि) meaning ‘sun’…

Bull fighting in Spain started around 18th century. There are different versions of bull fighting. In Spain the bull is killed ,that too with a weapon like we see in the Indus seals. This type of bull fighting has spread to Latin America and Mexico when the Spanish culture was introduced.

Whether it is Tamil Nadu or Spain special kind of bulls are raised exclusively for this purpose with a special type of diet and special training. Tamils have practised this ancient sport for at least two thousand years. They call it Jalli kattu or Manju Virattu or Eru Thazuvuthal. It means chasing the bull or tackling the bull. In ancient Tamil Nadu the horns of the bulls were tied with coins, may be gold coins…

We have lot of proof to believe that the Bull fighting was started by Lord Krishna who was the most popular cowherd (Yadava Kula Tilaka) in the world. Kaliyuga started in 3102 BC after the death of Krishna. But Mahabharata war took place between 1000 and 1500 BC according to majority of the scholars. Even if we go by this date, Krishna was the first one to have a fight with almost all the animals. He fought with an elephant, a bull, a python, a horse, a cran , a donkey and many more . All were set up by his uncle Kamsa according to Hindu mythology. These anecdotes have produced huge literature in Tamil and Sanskrit which has got no parallel in any part of the world. Krishna’s episodes are mentioned in film songs even today in almost all the Indian languages. The bull Krishna fought was Aristasura.

The proof for Krishna starting this comes from 2000 year old Sangam Tamil literature. Kalitokai is one of the eight anthologies of Sangam (Cankam) period. Nalluruthtiranar who sang Mullai Kali gave a graphic description of bull fighting. Justifying his name Shiva (Rudra), the poet mentioned Lord Siva in all his poems. Justifying that it was started during Mahabaharata days the poet gave lot of references to Mahabharata episodes. He said that it was practised by the Ayar community (cowherds)in the pastoral areas.

The poet mentioned how the bulls tear the bull fighters apart like the buffalo riding Yama, God of Death. The colourful bulls are described and compared to various personalities -white bull to Balarama and black bull to Krishna and so on. The Mullaik Kali has got 16 poems beautifully describing the pastoral culture of ancient Tamilnadu. Anyone who reads this Mullaik Kali will get a better picture of how it was practised in ancient Tamil Nadu. All the suspense, gossip, flirting, amorous desires of Ayar girls are dealt with in hundreds of lines- a feast to Tamil lovers.’

Jallikattu (Tamil: சல்லிகட்டு, callikaṭṭtu) also known Eruthazhuvuthal (Tamil: ஏறுதழுவல், ērutazhuval) or Manju viraṭṭu (Tamil: மஞ்சு விரட்டு), is a bull taming sport played in Tamil Nadu as a part of Pongal celebrations on Mattu Pongal day. Bulls are bred specifically for the sporting event and a specific breed of cattle bred for this purpose is known as “Jellicut”. In May 2014, the Supreme Court banned the sport citing animal welfare issues.

Jallikattu, which is bull-baiting or bull cuddling/holding was a popular sport amongst warriors during the Tamil classical period. Bull fighting was common among the ancient tribes who lived in the ‘Mullai’ geographical division of the ancient Tamil country.[5] Later, it the sport became a platform for display of bravery and prize money was introduced for entertainment. The term “Jallikattu” originated from the words “Jalli” and “Kattu”, referring to silver or gold coins tied to the bulls’ horns.[5] A seal from the Indus Valley Civilization depicting the sport is preserved in the National Museum, New Delhi.[6] A single painting discovered in a cave about 35 km west of Madurai shows a lone man trying to control a bull and the painting, done in white kaolin is estimated to be about 1,500 years old