I have, through my articles, been able to reconstruct, albeit in a limited way,Indian ancient History which has been obliterated.

Many misconceived notions have been cleared, like the Aryan Invasion theory, Tamil is antagonistic to Sanatana Dharam, Sanatana Dharma is about 5000 years  old,Ramayana and Mahabharata were just stories and legends,Indians were barbarians with no scientific temper,India was insulated from the world,Ancient civilizations rose in Egypt,Babylon…..

This I have been able to unearth with the help of information available in web from sources whose ancestors, have spread misinformation.

I had recently written an article on Lord Rama’s war with the Atlantis people .

While researching for the material to support my view, I had come across information about the Malaya Mountain, Malayamarutha.

Malayamarutha is often mentioned in the Ramayana and repeatedly in Tamil Literature.

Tamil is so obsessive with Malaya Mountain, even the Gentle breeze is named after it, Malaya Marutham.

This wind is recorded to have emanated from the south.

This breeze is soft, gentle and invigorating.

There is a Raaga, Muscial Note, by the name Malayamarutha.

It is one of the Janyaragas in Carnatic Music, which is highly mathematical.

Janya Ragas are Carnatic music ragas derived from the fundamental set of 72 ragas called Melakarta ragas, by the permutation and combination of the various ascending and descending notes. The process of deriving janya ragas from the parent melakartas is complex and leads to an open mathematical possibility of around thirty thousand ragas. Although limited by the necessity of the existence of individual swaroopas (unique identities) for the janya ragas, a list is never comprehensive or exhaustive.’

Why this obsession with a Mountain?

I recalled an article I had written on Satyavrata Manu, ancestor of Lord Rama, having lived in the South and migrated to Ayodhya, because of a Great Flood and whose son Ikshvaku founded the Ikshvaku Dynasty.

And this Satyavrata Manu is associated with the Great Flood and he is reported to have meditated in a Mountain.

‘The Sanskrit-language Bhagavata Purana (dated 500 BCE-1000 CE) describes its protagonist Manu (aka Satyavrata) as the Lord of Dravida (South India). TheMatsya Purana (dated 250–500 CE) also begins with Manu practicing tapas on Mount Malaya of South India. Manimeghalai (dated around 6th century CE) mentions that the ancient Chola port city of Kavirippumpattinam (present-day Puhar) was destroyed by a flood. It states that this flood was sent by the Hindu deity Indra, because the king forgot to celebrate a festival dedicated to him’

The little fish asked the king to save him, and out of compassion, he put it in a water jar. It kept growing bigger and bigger, until the king first put it in a bigger pitcher, and then deposited it in a well. When the well also proved insufficient for the ever-growing fish, the King placed it in a tank (reservoir), that was two yojanas (16 miles) in height above the surface and on land, as much in length, and a yojana (8 miles) in breadth.[5][6] As it grew further, the king had to put the fish in a river, and when even the river proved insufficient, he placed it in the ocean, after which it nearly filled the vast expanse of the great ocean.

It was then that Vishnu, revealing himself, informed the king of an all-destructive deluge which would be coming very soon.The king built a huge boat which housed his family, saptarishi, nine types of seeds, and animals to repopulate the earth, after the deluge would end and the oceans and seas would recede. At the time of deluge, Vishnu appeared as a horned fish and Shesha appeared as a rope, with which the king fastened the boat to horn of the fish.

The boat was perched after the deluge on the top of the Malaya Mountains. After the deluge, Manu’s family and the seven sages repopulated the earth.’ 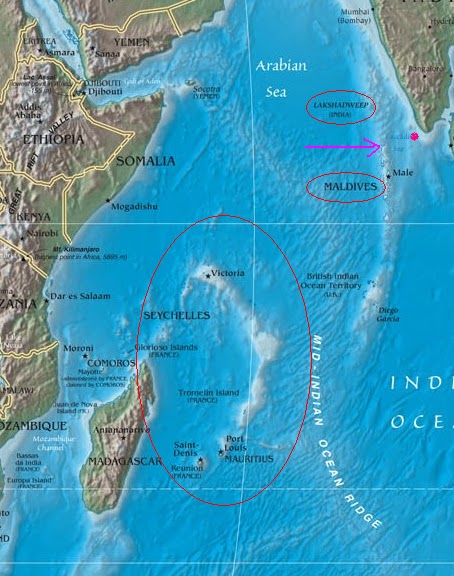 According to historians, Kuadam was very close to Tiruchendur. Abraham Pandithar says that Greeks in those days named it as Periplus port’ ( Wiki)

The Tami land extended from Kapadapuram to Then Madurai.( South Madurai, which is differnet from the Madurai now in Tamil Nadu , where Meenakshi Amman Temple is.

The distance is about 7460Kms and the western side the land stretched to Africa!( 700 Katham)

In this area there were 49 Tamil Kingdoms, called Ezheezh Nadukal( 7*7 countries)…

Note the Kumari Mountain , indicated by an arrow in the First Image, and it starts from what is the presently known as the Western Ghats and extends to Madagascar, where the Mascarene plateau lay in ancient times.

Since Satyavrata Manu was meditating on t a higher plane because of the great flood, the Mascarene plateau   fits.

As He is reported to have meditated in Malayamarutha, I am of the opinion that the Malayamarutha lay somewhere in  Mascarene plateau.. 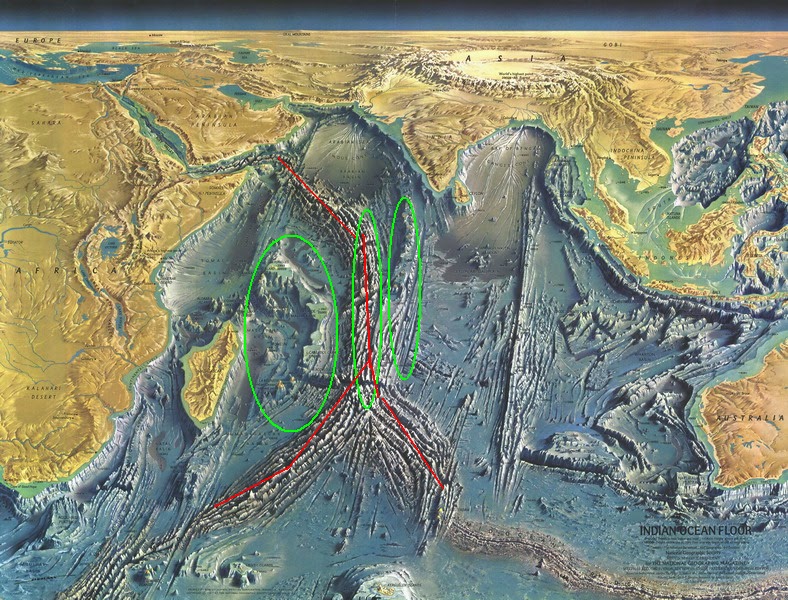 The Indian subcontinent was at one time next to the east coast of the Seychelles, but seafloor spreading has moved the landmass to its current position, where it has collided and fused with the continent of Asia.

The northern part of the Mascarene plateau is formed of granite, and is a fragment of the ancient supercontinent of Gondwana. The granite is topped with deposits of limestoneand basalt. The basalt deposits in the Seychelles are from the Deccan Traps eruption, which occurred in the central part of the Indian subcontinent 66 million years ago, at the end of the Cretaceous period.

And this lies close to what was Thenmadurai. 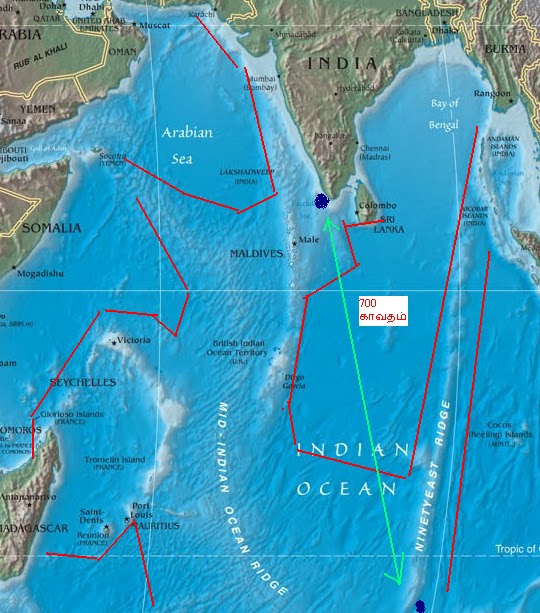 As the Malayamarutahm is recorded to have come from the south of Thenmadurai(South Madurai which is different from the Madurai in Tamil Nadu now), Satyavrata Manu , this could have been the Mountain range where Satyavrata Manu meditated .