Guruvayur is a famous temple of Lord Krishna in Kerala and is called as the Dwaraka of the South.

The temple is referred to as having been a place of worship since 5000 years. 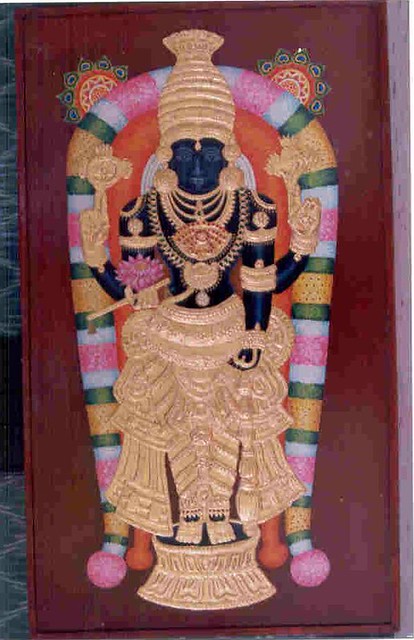 According to the legends, the idol worshipped here is more than 5000 years old. But there are no historical records to establish it. In the 14th century Tamil literature ‘Kokasandesam’, references about a place called Kuruvayur is made. As early as 16th century (50 years after the Narayaneeyam was composed) many references are seen about Kuruvayur. In ancient Dravidic, Kuruvai means sea, hence the village on the coast may be called Kuruvayur.

But according to Prof. K V Krishna Iyer (eminent historian), the Brahmins had begun to come and settle at Kodungalloor during the period of Chandra Gupta Maurya ( 321-297 BC). Trikkunavay in the Guruvayur documents is the same as Thrikkanamathilakam or Mathilakam mentioned in the Dutch and British records. And this place was in between Guruvayur and Kodungalloor. Guruvayur was Trikkunavay’s subordinate shrine since they were destroyed by the Dutch in 1755. That way Guruvayur must have come into existence before 52 AD. The story of Pandyan King building a shrine here may be a reference to the Azhavars , but they are all silent in their writing about Guruvayur.’..

The Temple is constructed B.C 3000(Around 5000 years oldest Temple) According to legends, the deity worshipped here is more than 5000 years old. But there are no historical records to establish it. In the 14th century, “Kokasandesam” (a Tamil literary work), references to a place called Kuruvayur are made. As early as the 16th century (fifty years after Narayaniyam was composed) many references to Kuruvayur are seen. In ancient Dravidian languages, “kuruvai” means “sea”, hence the village on the Malabar Coast may be called Kuruvayur. The earliest temple records date back to the 17th century. The earliest mention of the many important Vishnu temples of Kerala are found in the songs of Alwars,Tamil saints, whose time-line is not exactly fixed. Mamankam was a very famous local event at Tirunavaya, on the bank ofBharatappuzha. The battles between the Calicut under Zamorins and Valluvanad popularised Guruvayur Temple. Due to the prolonged battles, people across the riverbank started preferring Guruvayur. Even the Zamorin of Calicut become a devotee and thus his subjects followed him. The central shrine that see today is said to have been rebuilt in 1638 AD. “Viswabali” was performed later to propitiate all the spirits, good and bad. By the end of the 16th century Guruvayur had become the most popular pilgrimage centre in Kerala.

Considering the evidence I have been able to unearth about Hinduism and its spread throughout the world, its scientific approach and the references made to it by Sanskrit and Tamil literature two of the oldest languages, I am unable to brush aside that Gurauvayur has been a place of worship for 5000 years aside.

It is a fact that the Vedas do not advocate collective, group, community worship and no mention is found in them to the practice of building temples.

However, after the advent of the Agamas, the Temple worship has begun.

The Agamas  are dated behind Lord Krishna and Mahabharata, though there are references to the worship of Mother Goddess in the Mahabharata in small temples.

How these temples could have been built and by whom?

The ancient temple, as far as History goes in found in Saluvar Kuppam ,Pondicherry for Lord Subrahmanya, which is excavated.

Most of the early temples of India have been built by Tamil Kings.

If the Tamil Kings had to build temples they had to be conversant with the happenings in the North of India and should have been influenced by them.

They have been a part of Sanatana Dharma.

The Tamil King Perunchotru Udiyan Neduncherallathan provided food for the armies of the Kauravas and the Pandavas during the epic battle of Mahabharata.

He allotted lands to Brahmins in lieu for them performing the Yagnyas daily.

He also offered Tharpana for those soldiers who died in the war.

There is also evidence that Lord Krishna attended the Tamil Sangam as an Invitee.

He also married a Pandyan Princess , had a daughter through her and allotted Yadavas to serve her as a part of her dowry.

Ravana entered into a peace treaty with a Pandya King.

Rig Veda and Puranas have references to pieces, Elephant Tusks,Gems, and Pearls being imported from Tamil Nadu /Dravida.

Tamil Kings were present during the Swayamwar of Damayanthi, Sita, Draupadi, descriptions of the may be found in the Ramayana ,Mahabharata and the Puranas.

I have some articles on this.

During the Mahabharata Days the interaction between the South and the North were more intense and frequent than what it was during the Ramayana Period.

He was a special Invitee.

“Krishna was known to Tamil lands even during his life time. He had been one of the esteemed guests at the 2nd Sangam assemblage that took place in Kavaatam, the then capital of the Pandyans. Kavaatam’s location can be deciphered from Shugreeva’s description of the trail to the South which he described to the vanaras in chapter 4-41-19a. That place was submerged around the time Byt Dwaraka was submerged.”

Krishna married Nappinnai, a Pandyan Princess and had a Daughter Pandyahs, that’s how Megasthanes calls her.

Krishna had his daughter married to a Pandya Prince and settled her near Madurai.

The chances are that the Temple of Guruvayur having been built by a Tamil King, Krishna having been to the south and it could be a Tamil Pandya King who built the temple as Lord Krishna was the son-in-law of the Pandyas and his daughter was a Pandyan Princess.

Scholars may look into this.