Bharatavarsha was and is One,

Due to misinformation and doctored history, we feel we belong to different states.

The Sanatana Dharma culture permeated the whole Fabric of India.

We did and do speak different languages but we are one as a Bharatvanshi, united by our common culture. 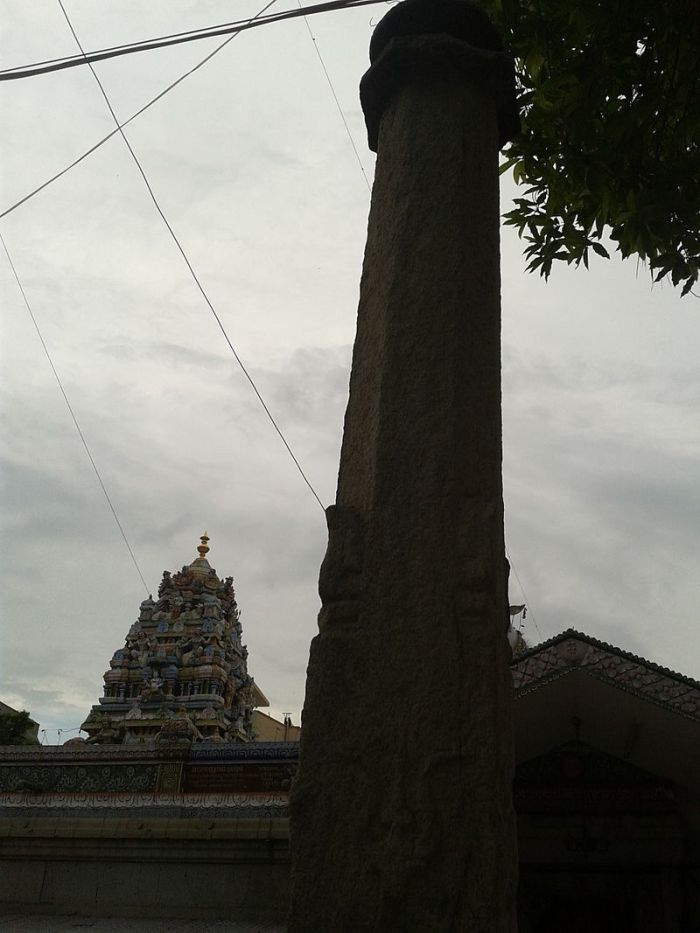 Someswara Temple,Old Madiwala,Bangalore. The temple is said to be a Chola period structure, making it one among Bangalore’s oldest. The earliest record dates to 1247 AD.source.By Eshwar.om at English Wikipedia, CC BY-SA 3.0, https://commons.wikimedia.org/w/index.php?curid=42152193

One can find evidence of this if one observes the practices followed in each state of India.

I have written about a 7000 year old Shiva Temple in Malleswaram, Bangalore.

We have one more Shiva temple which is 800 years old.

It was built by a Chola King and the. Someswara Temple,Central Silk Board, Madivala , as Tamil inscriptions.

‘Non-Bangaloreans perhaps conjure up images of silk when they hear these words. Almost certainly, an 800-year-old temple is not what you would associate with that bustling junction… which makes the Someshwara temple one of IT city’s best kept secrets.

The temple is in old Madivala, a place where shops and houses open out onto narrow lanes that twist this way and that, and where children still play cricket in the bylanes. And while traffic-induced chaos reigns supreme at the Silk Board junction, peace and quiet hold sway at the Someswhara temple a mere kilometre away.

The stone temple is said to be a Chola period temple, making it one among Bangalore’s oldest. And there is ample proof of its antiquity. Large portions of its outer walls are covered with inscriptions in Tamil and Grantha (an old script used to write Sanskrit) characters, attesting to the temple’s age. The earliest record dates to 1247 AD and refers to lands donated “below the big tank of Vengalur” by a resident of ‘Veppur’ (modern-day Begur). Other inscriptions seem to have followed in quick succession, recording grants made during the reigns of Hoysala king Ballala III and Chola king Rajendra. One record, from 1365, mentions a land grant at Tamaraikkirai (meaning ‘the banks of the lotus pond’ in Tamil). Epigraphy expert H S Gopala Rao, Secretary of the Karnataka Itihasa Academy, points out that this is the old name for what we today know as Tavarekere.

Apart from its obvious age, the Madivala area may have much else to boast about. Gopala Rao mentions how inscriptions have been found elsewhere in Bangalore which suggest that the illustrious Krishnadevaraya, the most famous king of the Vijayanagar empire, himself spent some time in Madivala.

Today, though, there are no trappings of royalty, either in Madivala or in the Someshwara temple. The temple underwent extensive renovations five years ago, but as Gopala Rao says, fortunately, the inscriptions were largely unharmed. The temple’s outer walls that carry the inscriptions and also idols of various gods including Ganesha, Durga and Vishnu, remain unaltered.

Inside, apart from shiny new flooring, the garba griha and artha mantapa were untouched. These inner chambers still remain small and darkened spaces that encourage a personal and intimate communion with the Lord.

Apart from four carved pillars, the artha mantapa has a large and elegantly proportioned granite Nandi facing the linga. Behind the Nandi, the eastern wall of the temple has a small opening that is directly in line with the linga.

In the days before Madivala was engulfed in buildings, the sun’s rays entered through this small opening to illuminate the linga. According to the priest, K Achyuta Rao, the temple’s deity is a Swayambhu linga, i.e., it is said to have manifested itself without any human agency.

‘The Someshware temple at Madivala is one of Bangalore’s oldest, dating back to the Chola period. There are a number of Tamil and Grantha inscriptions on the outer walls of the temple. The oldest of these inscriptions dates to 1247 AD talks about a land grants “below the big tank of Vengalur” by a Veppur (modern Begur) resident. Other inscriptions also talk about other land grants including those done during the reigns of Ballala III and Rajendra Chola. Another instrciption dated 1365 talks about land grand at Tamaraikkirai (which translates to ‘lotus pond bank’ in Tamil, and according to HS Gopala Rao, Secretary of the Karnataka Itihasa Academy refers to the present day Tavarekere suburb

Old Madiwala Sri Someshwara Temple located in Bangalore city (also Bengaluru) is dedicated to the deity Someshwara (the Hindu god Shiva). It is one among the oldest temples in the city and dates back to the Chola Empire period.The temple belongs to the early 12th century.(1247 AD).

The temple houses a “Swayambu” Shiva lingam in it Sanctum Sanctorum (Shiva lingam formed by natural Rock Formation). But unlike other ancient temples in Bangalore, this temple is in good shape and cared well by people around. This shows the real strength people have in protecting our heritage without outside help. It is very powerful and Ancienttemple.