The architectural genius of Indians is mind-boggling.

Please read my posts on these.

In Madurai Meenakshi Temple, when the plan showed that a straight line from the East tower is drawn to the West tower that line will pass through the main god Shiv Linga of the temple.

If a line is drawn between the South and North towers that will divide the Gods sanctum sanctorum in to two halves.

God’s sanctum sanctorum (garba griha) was constructed as if it is born by 8 elephants, 32 lions and 64 ganas. Till 50 years ago the sun light was falling on the god exactly on Pongal (Major festival celebrated on Thai first corresponding to 14th January).

The temple is the geographic and ritual center of the ancient city of Madurai and one of the largest temple complexes in Tamil Nadu. The temple complex is divided into a number of concentric quadrangular enclosures contained by high masonry walls. It is one of the few temples in Tamil Nadu to have four entrances facing four directions. Vishwantha Nayaka allegedly redesigned the city of Madurai in accordance with the principles laid down by Shilpa Shastras (Sanskrit: śilpa śāstra, also anglicized as silpa sastra meaning rules of architecture) relevant to urban planning. The city was laid out in the shape of square with a series of concentric streets culminating from the temple. These squares continue to retain their traditional names, Aadi, Chittirai, Avani-moola and Masi streets, corresponding to Tamil month names.Ancient Tamil classics mention that the temple was the center of the city and the streets happened to be radiating out like lotus and its petals. The templeprakarams (outer precincts of a temple) and streets accommodate an elobrate festival calendar in which dramatic processions circumabulate the shrines at varying distances from the centre. The vehicles used in processions are progressively more massive the further they travel from the centre.[20] The complex is in around 45 acres (180,000 m2) 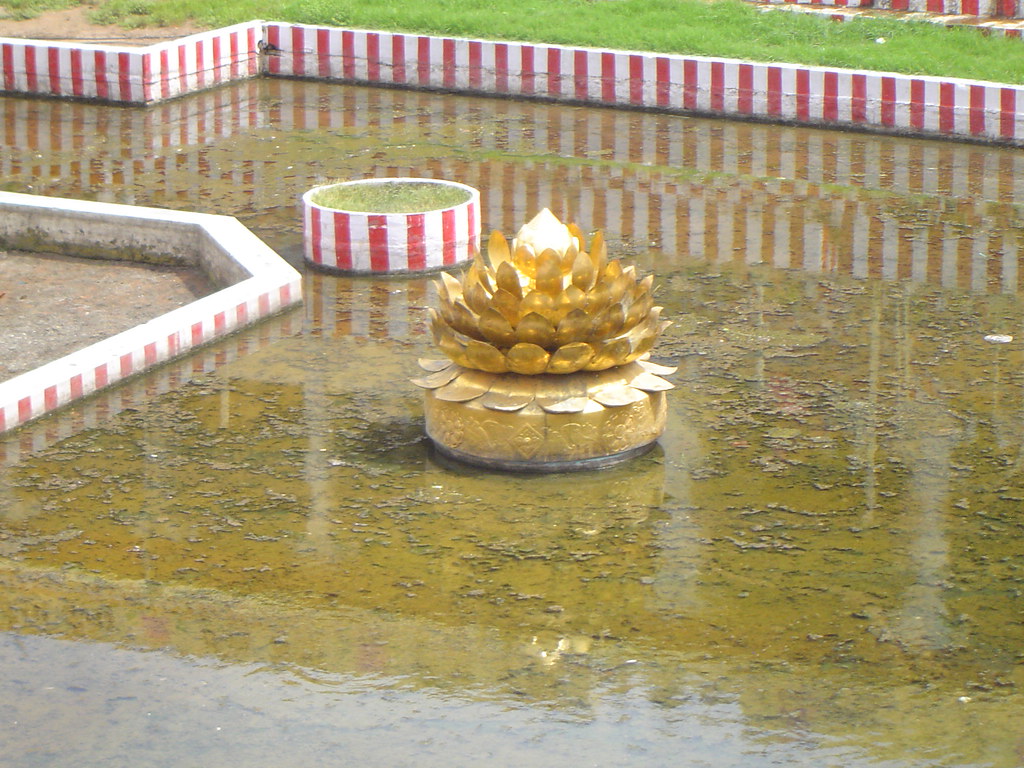 The temple is surrounded by gopurams (gateway tower), – There are 14 gopuram the tallest of which, the famous southern tower, rises to over 170 ft (52 m) and was built in 1559. The oldest gopuram is the eastern one, built by Maravarman Sundara Pandyan during 1216-1238[21] Each gopuram is a multi-storeyed structure, covered with thousands of stone figures of animals, gods and demons painted in bright hues. The outer gopuram presents steeply pyramidal tower encrusted with plaster figures, while the inner gopuram serves as the entrance to the inner enclosure of Sundareswarar shrine.

The central shrine of Meenakshi Amman temple and her consort Sundareswarar are surrounded by three enclosures and each of these are protected by four minor towers at the four points of the compass, the outer tower growing larger and reaching higher to the corresponding inner one. The Meenakshi shrine has the emerald-hued black stone image of Meenakshi. The Sundareswarar shrine lies at the centre of the complex, suggesting that the ritual dominance of the goddess developed later. Both the Meenakshi and Sundareswarar shrines have gold plated Vimanam (tower over sanctum). The golden top can be seen from a great distance in the west through the apertures of two successive towers. The area covered by the shrine of Sundareswarar is exactly one fourth of the area of the temple and that of Meenakshi is one fourth that of Sundareswarar.

The tall sculpture of Ganesh carved of single stone located outside the Sundareswarar shrine in the path from Meenashi shrine is called the Mukuruny Vinayakar. A large measure of rice measuring 3 kurini (a measure) is shaped into a big ball of sacrifice and hence the Ganesh is called Mukkurni Vinayagar (three kurinis). This deity is believed to be found during a 17th-century excavation process to dig the Mariamman temple tank.

The sacred temple tank Porthamarai Kulam (“Pond with the golden lotus”), is 165 ft (50 m) by 120 ft (37 m) in size.  In the Tamil legends, the lake is supposed to judge the worth of a new piece of literature. Authors place their works here and the poorly written works are supposed to sink and the scholastic ones are supposed to float, Tirukkural by Tiruvalluvar was one such work.

Only a fraction of 17th and 18th century paintings of Nayak period survives and one such portion is found in the small portico on the western side of the tank. It depicts the marriage of Sundareswarar and Meenkashi attended by Vijayaranga Chokkanatha and Rani Mangammal. The painting is executed on a vivid red background, with delicate black linework and large areas of white, green and ochre. The celestial couple is seated inside an architectural frame with a flowering tree in the background.

The corridor surrounding the sanctum the Meenakshi is called kilikoondu Mandapam (“bird cage corridor”). The space was once used to keep green parrots that were trained to utter the name of Meenakshi. There are two large cages full of squawking green parrots.

The Kambatadi Mandapam (“Hall of temple tree”) with its seated Nandi (sacred bull) has various manifestations of Shiva carved and also contains the famous “Marriage of Meenakshi” sculpture. Sculptures of Shiva and Kali trying to out-dance one another are pelted with balls of ghee by devotees. A golden flagstaff with 32 sections symbolizes the human backbone and is surrounded by various gods, including Durga and Siddar.

The Puthu Mandapam (“new hall”) constructed by Tirumala Nayak contains large number of sculptures. It is situated opposite to the east gopuram.

The Ashta Shakthi Mandapam (“Hall of eight goddess”) is the first hall in the entrance of Meenakshi shrine tower near to East Tower.Ashta indicates eight and Shakthi refers to goddess – the hall has statues of eight goddesses. The gopurams (towers) can be viewed from this hall.[28] The passage was named for eight forms of goddess Shakti carved on its pillars. Other sculptures and paintings depict theTiruvilayadal (holy games of Shiva).The sculptures of heroes of Mahabharata, the Pancha pandavas can be seen in the Pancha Pandava Mandapam (Hall of Pandavas).

The Viravasantharaya Mandapam is a large hall with huge corridors. To the south of this hall is the kalyana mandapam, to the south of the pillared hall, is where the marriage of Shiva and Parvati is celebrated every year during the Chithirai Festival in mid-April. The golden images of Meenakshi and Sundareswarar are carried into the 16th century oonjal mandapam (swing corridor) and placed on the swing every Friday at 5:30 p.m. The shrine has a 3-storied gopuram guarded by two stern dwarapalakas (guardians) and supported by golden, rectangular columns that bear lotus markings. Along the perimeter of the chamber, granite panels of the divine couple are present. The hall is situated in the western bank of the temple tank.

The Mudali Pillai Mandapam or Iruttu Mandapam (Dark hall) is a wide and long hall built by Muthu Pillai during 1613. On the pillars of the halls, there are fine sculptures depicting the story of Shiva taking the form of Bikshadanar to teach the sages a lesson.

The Mangayarkarasi mandapam is a newly built hall situated opposite to the marriage halls and bears the name of saindy queen, Mangayarkarasi who contributed to Saivism and Tamil language. To the south of Mangayarkarasi mandapam lies the Servaikarar Mandapam, a hall built by Marudu brothers in 1795. The Nagara mandapam (Hall of beating drums) lies opposite to Sundareswarar shrine was built by Achaya Rayar, the minister of Rani Mangammal in 1635. The Kolu Mandapam is a hall for displaying dolls during theNavarathri festival celebrated during September–October.This hall is situated in the second corridor of the Meenakshi shrine at the western side.

The Meenakshi Nayakkar Mandapam (“Hall of 1000 pillars”) has two rows of pillars carved with images of yali (mythological beast with body of lion and head of an elephant), commonly used as the symbol of Nayak power.It is situated to the north of Sundareswarar flag staff hall. The Thousand Pillar Hall contains 985 (instead of 1000) carved pillars. The hall was built by Ariyanatha Mudaliar in 1569 and blends engineering skill and artistic vision.[21] Ariyanatha Mudaliar was prime minister and general ofViswanatha Nayak, the first Nayaka of Madurai (1559–1600). He was also the founder of Poligar System, the quasi-feudal organization of the country dividing it into multiple palayams or small provinces in which each palayam was ruled by a palayakkarar or a petty chief. At the entrance of the hall is the statue of Ariyanatha Mudaliar seated on a horse-back, flanking one side of the entrance to the temple. The statue is periodically garlanded by worshippers. Each pillar in the hall is a carved monument of theDravidian sculpture. The more prominent among the carved figures are those of Rati (wife of Kama), Karthikeya, Ganesha, Shiva as a wandering mendicant and endless number of yalis (mythical figures of lions). There is a Temple Art Museum in the hall where icons, photographs, drawings, and other exhibits of the 1200 years old history of the temple are displayed. Just outside this hall, towards the west, are the Musical Pillars. Each pillar, when struck, produces a different musical note.