It is often assumed that Indian and Relations with Europe,especially with Italy, Greece began with the arrival of Alexander in India.

Trade relations between Greece and Vedic India are found during Vedic times, as evidenced in Vedas,Purans,Ranayana and Mahabharata.

Ionians were called as Yavanas. 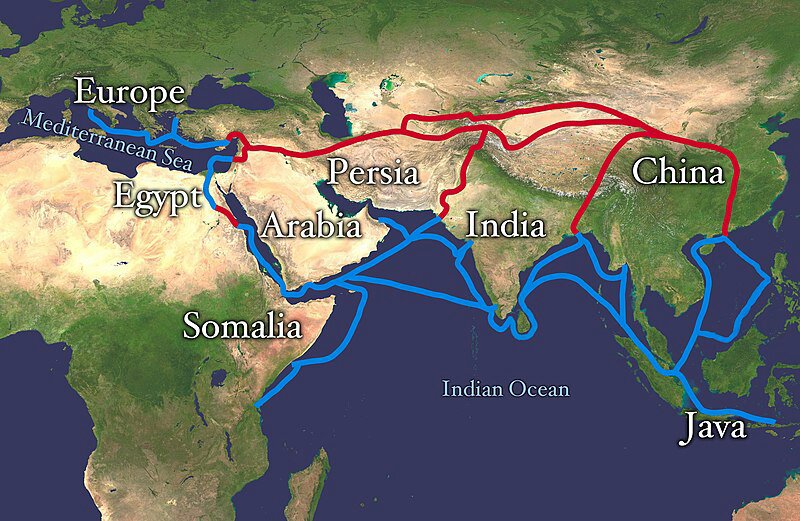 Tamil Kings, Chera,Chola and Pandyas carried on trade relationship with Europe , the latest date being 87 BC.

This date has been arrived at by referring Western Sources Pliny , The Elder, Arrian and Strabo, Grrek Historians.

The point to be noted is that they declare that trade continued with Tamilakam during the Period of Augustus and not ‘it began from the time of Augustus’.

Fact that Tamilakam was described extensively in Greek literature,that Sanskrit and Tamil texts belonging to period earlier to 87 BC, more specifically by Silappadikaram.

Now Poompuhar which has been excavated in Tanil Nadu, which is referred to by ancient western writers, has been dated around 12000 years ago, , it is reasonable to propose that trade between Tamilakam / India and Rome/ West existed 12000 years ago, conservatively.

‘The trade route taken by ships from Rome to Tamilakam has been described in detail by the writers, such as Strabo and Pliny the Elder. Roman and Arab sailors were aware of the existence of the monsoon winds that blew across the Indian Ocean on a seasonal basis. A Roman captain named Hippalus first sailed a direct route from Rome to India, using the monsoon winds. His method was later improved upon by merchants who shortened the voyage by sailing due east from the port of Cana or Cape Guardafui, finding that by this way it was possible to go directly from Rome to Tamilakam. Strabo writes that every year, about the time of the summer solstice, a fleet of one hundred and twenty vessels sailed from Myos Hormos, a port of Egypt on the Red Sea, and headed toward India. With assistance from the monsoons, the voyage took forty days to reach the ports of Tamilakam or Ceylon. Pliny writes that if the monsoons were blowing regularly, it was a forty-day trip to Muziris[39] from Ocelis located at the entrance to the Red Sea from the south. He writes that the passengers preferred to embark at Bacare (Vaikkarai) in Pandya country, rather than Muziris, which was infested with pirates.

The ships returned from Tamilakam carrying rich cargo which was transported in camel trains from the Red Sea to the Nile, then up the river to Alexandria, finally reaching the capital of the Roman empire. Evidence of Tamil trading presence in Egypt is seen in the form of Tamil inscriptions on pottery in Red Sea ports.
Imports and exports

Fine muslins and jewels, especially beryls (vaiduriyam) and pearls were exported from Tamilakam for personal adornment. Drugs, spices and condiments as well as crape ginger and other cosmetics fetched high prices. Even greater was the demand for pepper which, according to Pliny, sold at the price of 15 denarii (silver pieces) a pound. Sapphire, called kurundham in Tamil, and a variety of ruby were also exported. The other articles exported from Tamilakam were ivory, spikenard, betel, diamonds, amethysts and tortoiseshell. The Greek and Arabic names for rice (Oryza and urz), ginger(Gingibar and zanjabil) and cinnamon (Karpion and quarfa) are almost identical with their Tamil names, arisi, inchiver and karuva.[41] The imports were mostly luxury items such as glass, gold and wine. Horses were imported from Arabia.