One would find a lot of anamolies in the landmass presently called as India.

Though there are more than twenty eight languages and over 3000 dialects, there is an undercurrent of cultural unity among the people of India.

You go to Kashmir, the current northern outpost,Kanyakumari,the southern tip of Indian peninsula,Gujrat in the West and Assam in East, you would find that the basic way of welcoming guests,

The respect for Sanskrit and Vedic traditions, though Sanskrit is not the mother tongue,

Conduct of festivals,ceremonies, both auspicious and inauspicious,

The way food is served, though the main ingredients might differ,

The respect elders are accorded to,

Worship in temples,though slight variation is noticed, the core is the same,

Pilgrimage to places spread over India.

There also seems to be a parallel culture in the landmass.

The Bhagavatha Purana speaks of the southern landmass.

And there is total agreement of the worship system in the South with the exception of Fire worship mentioned in the Vedas.

We have this Anamoly of Hanuman travelling hundred yojanas, approximately 800 KM’s in search of Sita in Sri Lanka,while the present Sri Lanka lies hardly 13 KM’s from where Hanuman left for SRI Lanka.

I have written on Lemuria and Kumarikandam in detail.

Also that it lay northwest of the present Australia.

And about its population.

All this based on Arechological finds and sea level changes near New Zealand. 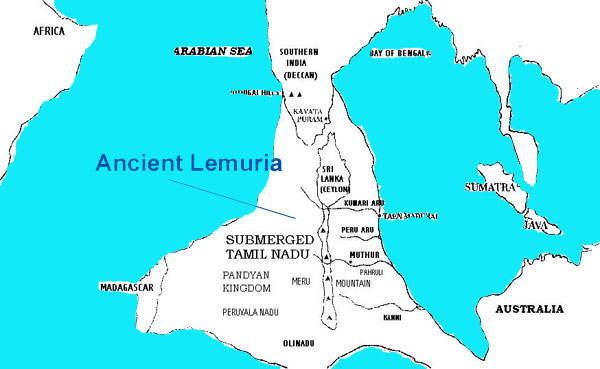 One Kavatam is equivalent to 10 Miles and seven Hundred Kavatam is 7000 Miles .

Lemuria extended from North to South from Kanykumari to new Zealand, 7000 Miles!

From the East to West.

Godavaya, Sri Lanka: 14 March 2009: Marine archaeologists have just discovered evidence of a large submerged landmass southeast of Sri Lanka. They believe it could be a legendary lost island closely linked to the culture and history of Sri Lankan people.

The discovery was made by a team of Dutch and Sri Lankan scientists based on satellite maps and underwater sample extractions from the deep sea. Preliminary data need to be verified by a deep sea submersible expedition during 2009 – 2010, according to a member of the research team who did not want to be identified.

The landmass is estimated to be between 450,000 and 475,000 square kilometres, which is about seven times the total land area of Sri Lanka.

“This could well be the long lost island of Irisiyawa, which is euphemistically mentioned in our chronicles and hinted at in the writings of Greek historians,” said Dr Godwin Samarawickrama, a maritime historian at the Indian Ocean Institute based in Melacca, Malaysia.

He added: “The existence of such an island has been speculated and talked in hush-hush terms among divers and archaeologists for decades. This is the Indian Ocean’s own version of Atlantis!”

Irisiyawa’s existence is first mentioned in the Sri Lankan chronicle of Culavamsa. Sinhalese Sandesa (message poem) writers in the 14th to 16th centuries often refer to the enormous psychological effect by sunken Irisiyawa on royal families, aristocracy and ordinary people. Some say the legacy of Irisiyawa has continued well into the twenty first century.

Other experts are more sceptical, and point out long-standing speculations about Kumari Kandam, a legendary sunken landmass said to have been located to the south of present-day Kanyakumari District at the southern tip of India. Some also call it Lemuria, a continent that existed in ancient times and sank beneath the ocean as a result of a geological, often cataclysmic, change. There is no scientific evidence to support these claims.

“Sri Lanka must quickly assert its historical and territorial claims over the newly discovered sunken island,” said Gajaba Vidyadheera, a senior lecturer in history at the University of Peradeniya. “If not, other countries and cultures can stake their own claims, leading to disputes and even international litigation.”

But the marine archaeology team who made the discovery advise caution. “We need much more evidence before even considering any claims, and historical and cultural speculation could only muddy the deep waters,” said a Dutch member of the team, none of who would make any statement on the record.

In recent years, much evidence has been found of maritime activity in and off the southern coast of Sri Lanka. In late 2008, an underwater search of the seas around Godavaya, Hambantota district, carried out by the Central Cultural Fund, revealed the wreck of a ship, possibly dating back to the 1st Century AD. If confirmed, this could be the oldest shipwreck in the Indian Ocean.

The girl was named Matsyagandha which means “the one who smells of fish”; due to her upbringing, she retained this characteristic for a time. She was Satyavati, who later married Shantanu and who was the mother of Sage Veda Vyasa, and thus the great-grandmother of the Pandavas and Kauravas. The boy was named Matsya because he was born out of a fish; he founded the Matsya Kingdom. His descendant was Virata who founded the kingdom’s capital Viratanagara.

Muchukunda , it may be theorised that he ruled the area ruled by Mandhata who is the first recorded Chakravarthi in Indian texts, Shodasha Rajika , Great Emperors ‘Mandhata on assuming power organized a strong army and led a series of expedition against his neighbouring kingdoms. The rulers of Kashi and Maithila and his uncle Tansu, the ruler of Prathisthan accepted his suzerainty.