The Continent of Antarctica remains a mystery even today.

We do not seem to know as much as we have of the Arctic.

Research has it that the Arctic had an advanced civilization and Sanatana Dharma was present there.

The Rig Veda was composed in the Arctic and Rig Veda Mandala City has been found in Arkaim, Russia.

Lake Baikal was the Vaikansa Theertha.

Please read my articles on these.

But not much is known about Antarctica.

Google Map has identified a massive line running for about 3 Kilometers under the Antarctic Ice, which is not made by Nature.

Expeditions to Antarctic have returned and their reports have been suppressed by the US.

I shall be writing in detail on these shortly.

Meanwhile  let us see whether we have any reference to antarctic in Hinduism.

The Antarctic was away from the Jambu  Dweepa and it has been described in the Purnas, especially  in the Vishnu Purana. 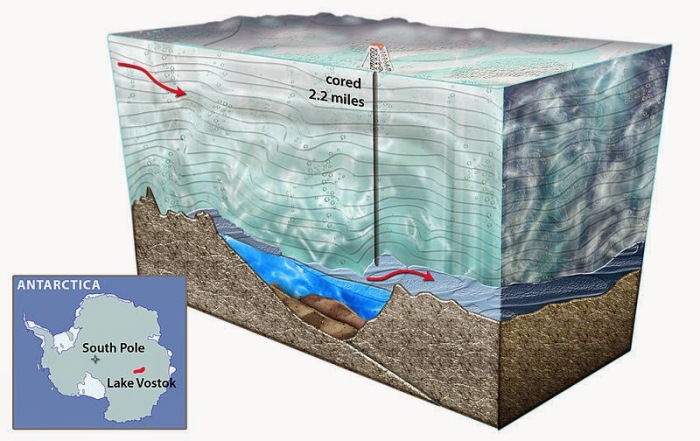 3.Salmali Dwipa, surrounded by a Sea of Wine(Sura)

4.Kusa Dwipa, surrounded by a sea of Clarified Butter,Ghee(Sarpi)

5Krauncha Dwipa , surrounded by a sea of Curds(Durghda)

6.Pushkara is surrounded by a Sea of Fresh..

A reservoir of water three times the volume of all the oceans has been discovered deep beneath the Earth’s surface. The finding could help explain where Earth’s seas came from.

The water is hidden inside a blue rock called ringwoodite that lies 700 kilometres underground in the mantle, the layer of hot rock between Earth’s surface and its core

Ocean Beneath The Earth Ramani’s blog

Asuras mean powerful despite the evil connotations ascribed to them.

This misinterpretation is by the West to confuse.

Indra has been described as as Asura in the  Rig Veda, clearly proving the interpretation of Asuras as Evil to be incorrect.

Monier-Williams traces the etymological roots of Asura (असुर) to Asu (असु), which means life of the spiritual world or departed spirits. In the oldest verses of the Samhita layer of Vedic texts, the Asuras are any spiritual, divine beings including those with good or bad intentions, and constructive or destructive inclinations or nature. In later verses of the Samhita layer of Vedic texts, Monier Williams states the Asuras are “evil spirits, demon and opponent of the gods”. Asuras connote the chaos-creating evil, in Hindu and Persian (Arians) mythology about the battle between good and evil.

Bhargava states the word, Asura, including its variants, asurya and asura, occurs “88 times in the Rigveda, 71 times in the singular number, four times in the dual, 10 times in the plural, and three times as the first member of a compound. In this, the feminine form, asuryaa, is included twice. The word, asurya, has been used 19 times as an abstract noun, while the abstract form asuratva occurs 24 times, 22 times in each of the 22 times of one hymn and twice in the other two hymns”.

Asura is used as an adjective meaning “powerful” or “mighty”. In the Rigveda, two generous kings, as well as some priests, have been described as asuras. One hymn requests a son who is an asura. In nine hymns, Indra is described as asura. Five times, he is said to possess asurya, and once he is said to possess asuratva. Agni has total of 12 asura descriptions, Varuna has 10, Mitra has eight, and Rudra has six. Bhargava gives a count of the word usage for every Vedic deity.The Book 1 of Rig Veda describesSavitr (Vedic solar deity) as an Asura who is a “kind leader

Ravana had his Moola Sainya in this area of Antarctica which included portions of Atlantis seaboard.

Sugreeva directs his Vanara army to search for Sita in the direction of Antarctica.

While doing so he describes New Zealand.

( ‘White cloud with a pearly necklace of waves rippling on the shores below‘.
Near to that is the Sudharshana Lake with ‘silvery lotuses which have fibrils of gold‘ and where ‘kingly swans scamper around‘.
Valmiki might be referring to Mount Cook & Lake Pukaki of New Zealand,.

Valmiki in Sundara Kand goes on to describe other areas near by thus.

“In the centre of that milk ocean there is a white mountain of colossal size, named Rishabha, surrounded with closely growing trees ever flowered with flowers of heavenly fragrance. And a lake renowned as Lake Sudarshana is also there, which is replete with silvery lotuses whose fibrils are golden in sparkle, and in which kingly swans will be scampering about. [4-40-44b, 45, 46a]

“To enjoy frolicking in that Sudarshana Lake the gods, caarana-s, yaksha-s, kinnaraa-s and hosts of apsara females will be arriving at that lotus-lake gladsomely. [4-40-46b, 47a]

“To enjoy frolicking in that Sudarshana Lake the gods, caarana-s, yaksha-s, kinnaraa-s and hosts of apsara females will be arriving at that lotus-lake gladsomely. [4-40-46b, 47a]

“And on crossing over the milky ocean, oh vanara-s, then you will be immediately seeing the soft-water ocean which will be frightening to all beings. [4-40-47b, 48a]

8b, 49a. tatra= there; tat kopa jam= that, from anger, originated – originated from the anger of Aurasa; mahat= fantastic one; haya mukham = horse, face; tejaH kR^itam= by refulgent Fire, made – by the anger of Aurasa; sa cara a caram= with, mobile, not, mobile [sessile beings]; mahaa vegam= highly speedy [waves of ocean]; tat= that [water of ocean]; asya odanam aahuH= its [to the Fire,] victuals, said to be.

“There exists a fantastically refulgent Fire in the form of Horse’s Face that originated from the anger of Sage Aurasa. The victuals to that Fire is said to be that highly speedy waves of the ocean, together with all of the mobile and sessile beings of the world at the close of each Era. [4-40-48b, 49a]

Aurasa derives from the word uuru, meaning ‘the thigh.’ The mother this sage hid him under her thigh when some kings came to kill, as such he got this name. Then with vengeance this sage started to burn the world with his yogic fire, but his manes came to him to pacify and asked him to release his yogic fire in oceanic water. When he did so, that fire remained underwater, ready to emerge from a cavity like that of a she-horse’s mouth, from beneath the ocean from the South Pole. This fire is called vaDaba agni, orbaDaba anala , referred here as Horse’s Face. At the time of yuga anta, End of Era, that fire emerges out, and the whole creation, with all its sessile and mobile beings, becomes its fuel, as said in next verse. This episode is detailed in aadi parva , First Canto, Maha Bharata.

“On the northern province of that soft-water ocean there is a hugely enormous mountain named Jaataruupa-shila, Golden Rock Mountain, which glitters like gold and which spreads across thirteen yojana-s. [4-40-50]’

Now a Russian Expedition has found a massive Swastika underneath Antarctic Ice!

The Russian scientific team that has successfully drilled 3,768 meters into the world’s largest submerged lake on the continent of Antarctica, believed to be untouched for over 20 million years, states that the underwater video camera discovered the “striking image” of a “golden-like swastika” estimated to be no less than 100 meters in height and width.

According to this report, the discovery of this underwater swastika was made late January, followed immediately by the Ministry ordering the scientists who have been working on this project for the past 20 years into silence.

Highly specialized encrypted communication devices has been dispatched to them. This unusual secrecy has added to existing fears as they had been “out of communication” for 5 days. Upon their receiving their new communication “devices” the scientists released their first report to the world through Russian state media’s RIA Novosti which added into their announcement of this historic mission the following:
It is thought that towards the end of the Second World War, the NAZIs moved to the South Pole and started constructing a base at Lake Vostok. In 1943, Grand Admiral Karl Dontiz was quoted saying

“Germany’s submarine fleet is proud that it created an unassailable fortress for the Fuehrer on the other end of the world, in Antarctica.”

With the current events at Lake Vostok, an old theory saying that German Nazis may have built a secret base there as early as the 1930s, has resurfaced. It is thought that towards the end of the Second World War, the Nazis moved to the South Pole and started constructing a base in Antarctica.

‘
Ancient ruins of Antarctica hidden city discovered by Atlantis TV production crew, who went missing since november 2002.
USA government tried to block the airing of a video found by Navy rescuers in Antarctica that purportedly reveals that a massive archaeological dig is underway two miles (3,200 meters) beneath the ice.
USA government has no jurisdiction in that continent and the Atlantis TV company is trying to get back the original video.
Now, scientists claim that Antarctica was much warmer 12000 years ago and humans inhabited it.
Recently they discovered three man made huge pyramid like structures in antarctica, which seem to be older than their egyptian counterparts.”
References and citations.
http://atlanteangardens.blogspot.in/2014/04/massive-swastika-found-under-ancient.html
http://www.exopoliticsindia.in/2016/05/antarctica-hidden-city-and-pyramids.html
http://www.valmikiramayan.net/kishkindha/sarga40/kishkindha_40_frame.htm