Tirupati Balaji, Venkateswara is one of the most venerated Gods of Hinduism and the temple, in Chittoor District is visited by thousands of people everyday.

The Hindu Puranas speak of this temple as being quite old.

This Temple in the Tirupati/Tirumala Hills is and surrounded by  Hills which are prehistoric and the Hills have the world’s most ancient natural rock Archway.

Geologists have dated this and the information tallies with what Hindu Puranas say about the age of the Hills.

It is about 21oo Million years old.

Eparchaean Unconformity (Tirupati hills) is a major discontinuity of stratigraphic significance that represents a period of remarkable serenity in the geological history of the earth. It is seen at the steep natural slopes, road scars and ravines in the Tirupati – Tirumala Ghatroad in Chittoor district of Andhra Pradesh, India.[1][2]

In 2001, the Geological Survey of India (GSI) declared the unconformity to be one of the 26 “Geological Monuments of India”. GSI’s commemoration document, published on the occasion of the 150 years anniversary celebration, provides an insight into the formation of the subcontinent, the orogeny, the paleoenvironment and the exotic collection of paleo-flora and fauna. The details provided for the Eparchaean Unconformity monument indicate that this feature forms the boundary surface between Proterozoic Nagari Quartzites andArchaean granite. The time gap between the formation of the two units is at least 500 Ma.[2] 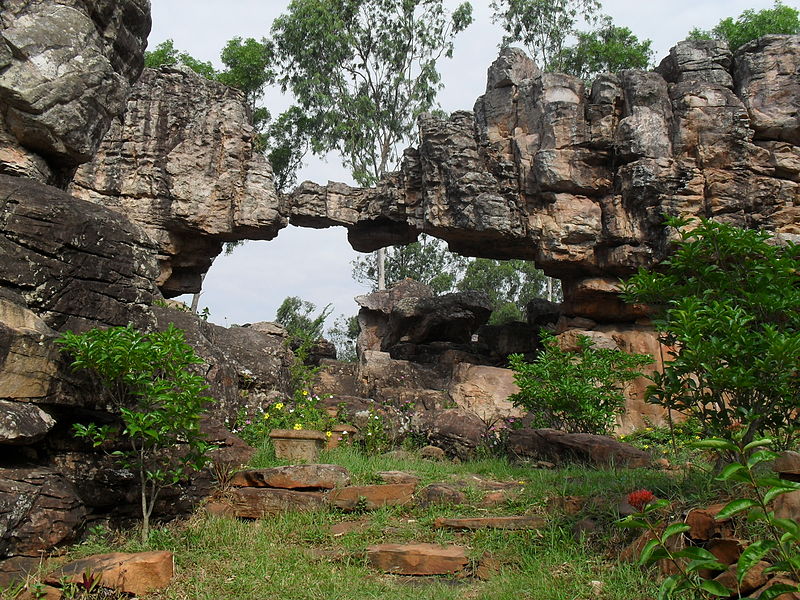 Natural Archway Tirupati, The assessed geological age of the rock arch is 2.5 billion years. Formation of the arch is attributed to intensified weathering and erosion of stream action that has withstood the torque of nature Image Credit.”Natural stone arch in tirumala” by Tatiraju.rishabh at English Wikipedia. Licensed under CC BY 3.0 via Wikimedia Commons – https://commons.wikimedia.org/wiki/File:Natural_stone_arch_in_tirumala.JPG#/media/File:Natural_stone_arch_in_tirumala.JPG

At this location, the boundary is between sedimentary rocks of the Cudappah Supergroup, 1600 million years in age, and Archaean rocks comprising granites, gneisses and dolerite dykes that are more than 2100 million years old. This unconformity gives an indication of the enormous time gap in the creation of the earth’s crust.

The Tirupati hills are situated at the foot of a range of hills known by several names, including ‘Seshachala’, ‘Venkatachala’ and ‘Balaji’. There are four geological units:

(1) Archaean rocks of the eastern Dharwar Craton (the granites and gneisses)
(2) the Eparchean unconformity (Quartzose sandstones overlying the granite with a distinct unconformity)
(3) Puranas (a general name for Proterozoic sedimentary sequences found in a series of basins deposited on the Indian Shield; including the Cuddapah Basin)[4]
(4) Quaternary deposits

The Tirumala hills essentially of precambrian period are composed of sedimentary rocks – quartzites and intercalated shales, which are referred to as the Nagari quartzites, which forms part of the Cuddapah Supergroup. It is a subset of the Purana rock succession that rests above the archaean rocks.[2][3][5]

The hill ranges of the Tirumala rise to a height of 900 metres (3,000 ft) (at Tirumala) from the average height of 150 metres (490 ft) in the plains at Tirupati. The steep scarp of the ranges shows the Eparchian Unconformity’s topographic, structural and denudational features.[2][6] The sedimentary thickness of the Cudappah basin is of the order of 12 kilometres (7.5 mi), and includes volcanic sequences in the form of sills and dykes. A prominent Eparchaean Unconformity of the formation resting on the archaean peninsular gneissic complex is noted. Rocks of the Cuddapah Supergroup, and the overlying Kurnool Group, comprise the stratigraphic sequence of the basin. This feature is contiguous all along the defined Archaean-Cuddapah contact zone even though its age may vary along its traced path.[2][7]

The location of the Geological Monument is well connected by road, rail and air routes. The nearest railhead to Tirumala hills is Tirupati. The geological monument is located 10 kilometres (6.2 mi) northwest of Tirupati town, at the 12 kilometres (7.5 mi) point on the Tirupati – Tirumala Ghat road. From Tirupati railway station the approach to the Tirumal temple is only by road, a distance of 10 kilometres (6.2 mi).[2][8] The nearest airport is located at Renigunta, about 15 kilometres (9.3 mi) away from the Tirupati city, which connects to Chennai, Hyderabad and Bangalore airports. Regular bus services (both private and government) are operated by all the states bordering Andhra Pradesh.

Known History of the temple as per records.

The Tirumala Hill is 3200 ft above sea level, and is about 10.33 sq miles in area. It comprises seven peaks, representing the seven hoods of Adisesha, thus earning the name, Seshachalam. The seven peaks are called Seshadri, Neeladri, Garudadri, Anjanadri, Vrishabhadri, Narayanadri and Venkatadri.