As Science, with its self-made rules, which takes only Perception as the tool of Knowledge ,always flounders  on this issue, Philosophy comes to its rescue.

Though Scientists may ridicule Intuition  in Public, they accept it in Private.

One may recall that many  discoveries in Science were because of a flash of inspiration, from Newton’s Laws of Motion, Clarks’ Table to Einstein’s Theory of Relativity all have been a result of a flash of Imagination.

This is called Intuition.

The Purusha Suktha expalins the evolution of Universe at the Universal Level.

The Reality is described , explaining the evolution of Seasons, Laws etc.

The Purusha Suktha is loaded with energy and the first two lines have produced electricity.

As is a fact in Hinduism, what is in the Macrocosm and vice versa.

Research , applying this , along with the verses in the Rig and Yajur Vedas have delivered stunning results, including the origin of the DNA .

Every thing must have a cause even in Science.

When one tries to explain the First Cause, science fails.

It dictates that you should accept axioms which can not be proved!

But Indian Philosophy and Seers(Rishis) found out the Truth and First Cause, accepting Intuition as a source of Knowledge.

And Science to-day has validated most of the by the experimental method.

Now to the Study of DNA with the help of the Vedas.

The life on the earth has evolved from the fundamental energy Figure 1, the ;life is supported by the three important factors. The – ozone layer in the mid atmosphere, the water on the earth, the conversion of hydrogen into helium. Figure 4 the first life has originated in the water. The beginning of the photosynthesis with recombination of the genetic material has opened the door for the organic evolution on the earth. Figure 3,4

The life on the earth has evolved from fundamental energy under the laws of thermodynamics and genetic inheritance. The physical basis of life is cell. Figure 3. The life on the earth is supported by t he ozone O3 layer in the mid atmosphere, the source of energy is the conversion of hydrogen into helium H3 on the surface of the sun. The water molecule H2O = 3 is life resource.

The first-created: water consists of H2O, it has been expressed by three warm the Earth while holding water reservoir, and from their separation came the letter, and two of these convey the murmuring moisture is H+ & OH־ ions.  It expresses the phenomena of ionization Rig-Veda 10- 27-23 .

The Indus Valley Civilization was scientifically developed. It has generated a quest to know their source of scientific development. It has been observed that the excavated seals and the tablets are the hoofs of their traces. The Vedic metaphors have been engraved on the seals. The symbols have vast ocean of knowledge in background. They explore the reactions at molecular level. Its literary evidences can be traced in the Vedic hymns, where a picture of well developed society has been explored Rig-Veda 1-164. With this knowledge the cities like Harappa and Mohenjo-daro can be developed. The symbols narrates the origin and evolution of the creation from the fundamental energy Rig-Veda 10-90, Bell’s theorem 1972 Clauser, Freedman, David Boehm, and Alain Aspect1985

Nature April 2006  the oldest (and first early Neolithic) evidence for the drilling of human teeth in vivo (i.e., in a living person) was found in Mehrgarh.

The Vedas are the book of Science, The Vedic language is a symbolic language, where words are only the indicator of the phenomena, having vast ocean of knowledge in the background. If one knows the related phenomena than only he can give the answers related with the symbols. The Vedic seers were the head of the contemporary Institutes of education, the metaphors and the riddles reflect their examination system. To get the answer from the students the pictographs have been engraved on the seals.

The living-beings have evolved from the DNA with genetic recombination and the Mendel’s laws of inheritance. The life on the earth is supported by the ozone layer O 3.   The conversion of the hydrogen into Helium H 3 on the surface of the sun, and the water molecules H 2 O.

The creation has evolved from the fundamental energy with energy transformation. The laws of thermodynamics have been expressed by the three faces of the symbolic Man showing origin.

The horned hood express the synthesis of DNA from the atoms and molecules. They have synthesized the cell and the genomic chromosome. The surrounding animals have been evolved from the single cell with genetic recombination and crossing over.

It has been expressed that the life has originated on the earth with synthesis of a cell, it has been expressed by a fish like structure the dot in the centre represent nucleus in the cell. The leaves on the head is a symbol for the photosynthesis,  The genetic recombination with crossing over have given the ways for evolution. 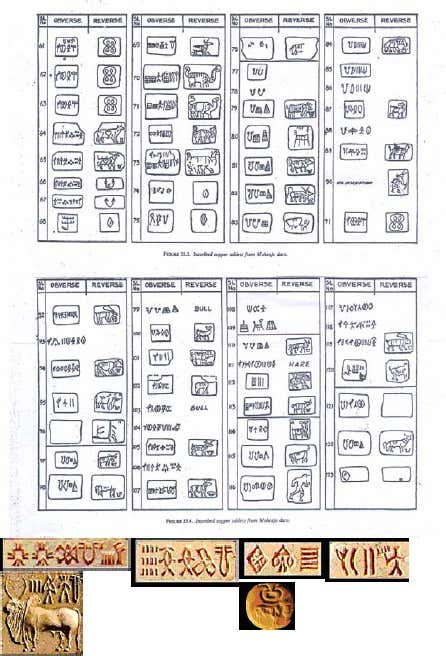 cosmic condition of the fundamental energy, when there wasnothing in existence only deep darkness was there. Therewas only one force, which began to disintegrate from infiniteto finite with its back ground in the infinite cosmos Rig-Veda10-129 1, 2, 3.
Rig-Veda 10-129- 2 “

“The kine extract milk from his head; clothing themselves in a wrap, they drunk water with the foot Rig-Veda 1-164-7

The seven figures at the base expresses the phenotypes and genotypes.

Guarded by covering-arrangements, defended by watchmen (?? b ā rhata), O Soma, thou standest hearing the pressing-stones; no earthly one partakes of thee Atharvaveda 14-1-5