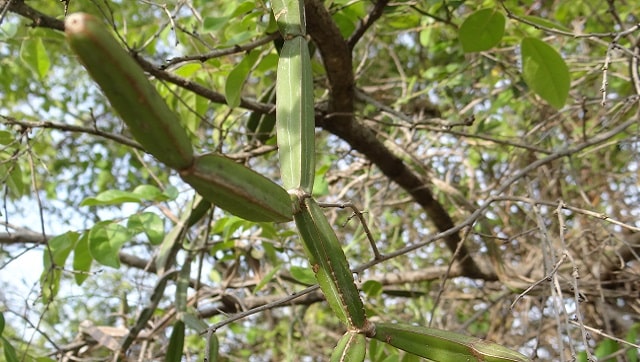 Indian cuisine is so varied that one finds subtle variations in the type of rice / wheat used,oils,vegetables,other ingredients like coconut, and spices.Not only this you can notice the process of cooking also differs yet so slightly.Leave alone the major difference between the North and South India in the use of staple food,North uses Wheat while south and East rely more on Rice,the variation within a state that too within a few miles is astonishing.On closer examination,one can find that this is not just to tickele one’s taste bud,but it takes into consideration the environment in which one lives,which includes season.Thus in the month of April one can find people of South India, starting to use more of Mangoes beginning with Ugadi .This is the season for Mangoes. And ancient Indian texts suggest one eat what is available for the season and not to consume things that are not germane to the season,of course there are exceptions.

I can say with experience that this is not aunt’s tale. Consumption of certain vegetables in winter creates health issues while it’s consumption during other times is beneficial. Consumption of Brinjal during Summer cools down your body,which can be felt.But when you use it in winter you shall get cold related issues.I shall write on what to eat and when.

We have also forgotten some of the vegetables which our parents, grandparents were using.Those vegetables have extraordinary properties in preventing, Curing rare diseases.

One such is Prandai.This has the ability to set fractured bones,prevents menstrual issues,helps digestion. ‘its antiulcer, antihaemorrhoid, pain-relieving and wound-healing properties. It is considered a valuable antimicrobial agent, useful in maintaining good gut flora, combating bacteria and promoting digestion.:

This Pirandai is used during Sraddha,annual ceremony for ancestors and used ,mostly in Brahmin homes in Tamil Nadu , at least once a month.

This is used in the form of Thuvayal, Chutney. This will be in the form of a paste. This is to be mixed with cooked rice along with a teaspoon of Gingelly oil.

Take one Pirandai stick.Wash it with water. Then saute in Gingelly oil preferably, four red chillies,one teaspoon Urad dal,A pinch of Asafoetida till they become golden brown.Upon cooling, take this mixture and add to the Pirandai( after cutting it down into two or three pieces,with its skin,so that it fits into mixer) ,keep these in Mixie ,add salt to taste and run the Mixie to turn this into a paste.

Other method is to Keep in a cooker for one whistle ( don’t add water) and use it instead of using it Raw.Cooking procedure remains the same.

Recommended to use it raw without cooking as explained vin the first procedure.At times Pirandai can cause itching sensation in the tongue. Before cooking, you can test this by keeping a tiny bit on the tongue by cutting a tiny bit at any of the ends of the stick, and if it itches, take the cut piece and rub it vigorously against the exposed part of Pirandai end and do the same at the other end of Pirandai by cutting va tiny bit and repeating the process.

The groundbreaking Dutch botanical text Hortus Indicus Malabaricus, Continents Regni Malabarici apud Indos celeberrimi omnis generis Plantas rariores, 1678-1681 — more commonly known as the Hortus Malabaricus — which is generally considered the oldest comprehensive printed book on the medicinal plant wealth of Malabar lists the Cissus quadrangularis as one of among 554 plants whose medicinal uses were known to physicians at the time. The curative properties of its leaves were noted to have played a role in curing intestinal gas and ear scum.

The ethnomedicinal benefits of the root and stem extracts of the Cissus quadrangularis have been long acknowledged by Ayurveda and the plant has been mentioned in ancient scriptures as a general tonic and analgesic. Its osteo protective properties can be credited for its Sanskrit name asthisamharaka, which literally translates to, “that which protects the bones from destruction”.

Vernacular Hindi names such as hadjod or “the bone setter” are also testimony to its traditional use as a medicine to accelerate the process of bone fracture healing. Rich in calcium, magnesium and the antioxidant resveratrol, the plant facilitates bone cell growth and regeneration. Veterinary practices to a similar effect have been observed by Saneesh CS, a PhD research scholar of biodiversity in the grassland ecosystem, who works in the Chittoor and Anantapur districts of southern Andhra Pradesh. The area, according to him, has a number of local Ayurvedic practititioners. He says, “A paste made of the plant is often used to heal fractures. In Chittoor and Anantapur, most people are shepherds so if a sheep or goat has a fracture, they make a paste and apply it to the broken limb and fasten it tightly with a cotton cloth.