The knowledge base of ancient India is quite vast , seemingly endless.

Advanced concepts in Mathematics has a special place.

And extensive knowledge of Geography.

This can be evidenced from the descriptions of the world in the Puranas.

And the detailed explanation of geographical locations in the Sundarakanda of Ramayana,when Sugreeva directs the vanara senas to search for Sita.

It would be interesting to note that World Time Zones Concept was devised in ancient. India by Baskaracharya,12th Century AD, in his Siddhandha Siromani.

The West devised this World Time Zones Concept in its rudimentary state in 18th Century.

Quirico Filopanti. He introduced the idea in his book Miranda!published in 1858.

‘Bhaskaracarya mentions the time difference between the important cities situated in different parts of the world in his Siddhanta Siromani(Goladhyaya) thus:

“When the sun rises at Lanka, the time as at Yakakotipura to the east of Lanka, will be midday. Below the earth at Siddhapura, it will be twilight then, and at Romakadesa in Europe, the time will be midnight. 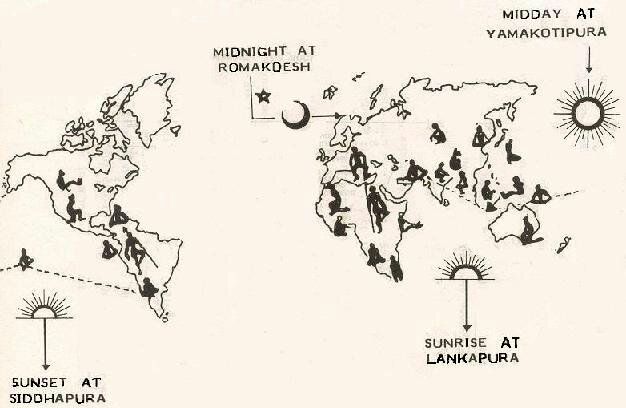 http://www.hinduwisdom.info/Pacific.htm
on Greater India: Suvarnabhumi and Sacred Angkor and Seafaring in Ancient India. For Hindu Astronomy refer to chapter Hindu Culture. Refer to India once ruled the Americas!– By Gene D Matlock.

The first known person to conceive of a worldwide system of time zones was the Italian mathematician Quirico Filopanti. He introduced the idea in his book Miranda!published in 1858. He proposed 24 hourly time zones, which he called “longitudinal days”, the first centred on the meridian of Rome. He also proposed a universal time to be used in astronomy and telegraphy. But his book attracted no attention until long after his death.

Scottish-born Canadian Sir Sandford Flemingproposed a worldwide system of time zones in 1879. He advocated his system at several international conferences, and is credited with “the initial effort that led to the adoption of the present time meridians”. In 1876, his first proposal was for a global 24-hour clock, conceptually located at the centre of the Earth and not linked to any surface meridian. In 1879 he specified that his universal day would begin at the anti-meridian of Greenwich (180th meridian), while conceding that hourly time zones might have some limited local use. He also proposed his system at the International Meridian Conference in October 1884, but it did not adopt his time zones because they were not within its purview. The conference did adopt a universal day of 24 hours beginning at Greenwich midnight, but specified that it “shall not interfere with the use of local or standard time where desirable”.

Like Loading...
‹ How Sound Is Born From Eight Organs Tholkappiyam Tamil Explains
First US Central South Americans Were From India ›