Hanuman Transported 1991 Km In less Than A Minute Through Wormhole

I had written how Hanuman and the Vanara Sena were disoriented on entering a cave in Vindhya mountain, lost their sense of time and Swayamprabha helped them to escape. 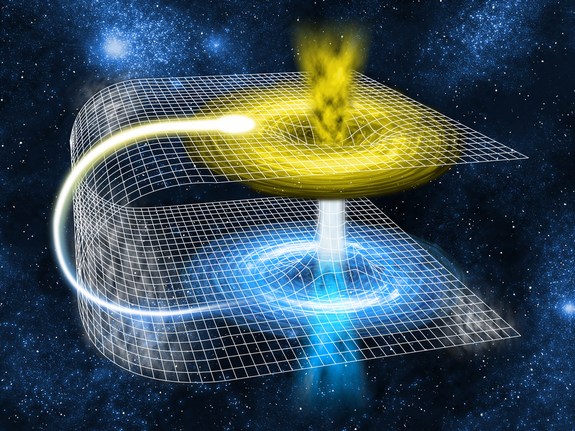 Hello. I have personally been to see the cave paintings in the Hoshangabad region or the UFO, wormhole and strange human figure last year. I am very interested in the wormhole idea relating to the Ramayana and Dr Wasim Khan took me to the place to see for myself. The paintings are not actually in a cave but in a rock shelter. I would be very interested to know where you think the actual cave might be where Swayamprabha met Hanuman and the Vanara Commandos. Do you have any ideas?

Hanuman, with his vanara sena was transported by Swayamprabha , through a wormhole from Madhya Pradesh to the Indian ocean  at the tip of Tamil Nadu, 1991 Miles in a few Minutes!

What is a Wormhole?

A wormhole is a hypothetical topological feature that would fundamentally be a shortcut through spacetime. A wormhole is much like a tunnel with two ends, each in separate points in spacetime.

For a simplified notion of a wormhole, visualize space as a two-dimensional (2D) surface. In this case, a wormhole can be pictured as a hole in that surface that leads into a 3D tube (the inside surface of a cylinder). This tube then re-emerges at another location on the 2D surface with a similar hole as the entrance. An actual wormhole would be analogous to this, but with the spatial dimensions raised by one. For example, instead of circular holes on a 2D plane, the entry and exit points could be visualized as spheres in 3D space.