I have written quite a few articles on Lemuria,Kumarikanadam,and Atlantis.

In the west it was first mentioned by Plato in Dialogues.

I have theorized,based on available evidence on the three land masses, Lemuria, Kumarikandam and Lemuria, Sanskrit references to Shiva’s Three Rotating cities and Tamil Classics’s reference and description of Kumarikandam,it’s boundaries, population Trinetra Dance of Shiva among Australian tribes,Nazca Lines,Peru,resembling Shiva’s Trident, description of Cooke’s Island,New Zealand in Sundarakanda of Ramayan, Natural Vishnu Temple, ,Quadrilateral Temple of Shiva in Grand canyon,US ,Tamil language being spoken in Cameroon even today by the Aborigines and a host of other evidence,that Atlantis abutted Lemuria.

And extended up to present Americas.

Shiva’s Tripura was located in Atlantis.

Also description of The city of Bandasura’s city in Lalitha Sahasranama,matches the underwater structures found off the Coast of Central America and Cuba.

New evidence unearthed off the Coast off Spain shows a city with three concentric rings and the lay out is Shiva Lungs with Avudayaar (base).

The team of archaeologists and geologists in 2009 and 2010 used a combination of deep-ground radar, digital mapping and underwater technology to survey the site.

Freund’s discovery in central Spain of a strange series of “memorial cities,” built in Atlantis’ image by its refugees after the city’s likely destruction by a tsunami, gave researchers added proof and confidence, he said.

Atlantean residents who did not die in the tsunami fled inland and built new cities there, he added.

The team’s conclusions are detailed in “Finding Atlantis,” a National Geographic Channel special. 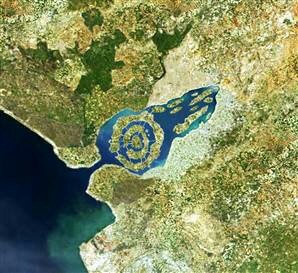 image information.
computer graphic shows the concentric rings that may have existed during Atlantis’ ancient heyday. Scientists have seen evidence of such submerged structures beneath the vast marshlands of southern Spain’s Dona Ana Park.

Greek philosopher Plato wrote about Atlantis 2,600 years ago, describing it as “an island situated in front of the straits which are by you called the Pillars of Hercules,” as the Straits of Gibraltar were known in antiquity.

Using Plato’s detailed account of Atlantis as a map, searches have focused on the Mediterranean and Atlantic as the best possible sites for the city. Researchers have previously proposed that Atlantis was located on the Greek island of Santorini , the Italian island of Sardinia or on Cyprus .

Tsunamis in the region have been documented for centuries, Freund says. One of the largest was a reported 10-story tidal wave that slammed Lisbon in November 1755.

Debate about whether Atlantis truly existed has lasted for thousands of years. Plato’s “dialogues” from around 360 B.C. are the only known historical sources of information about the iconic city. Plato said the island he called Atlantis “in a single day and night … disappeared into the depths of the sea.”

Experts plan further excavations at the site where they believe Atlantis is located and at the mysterious “cities” in central Spain 150 miles away to more closely study geological formations and to date artifacts.

This report includes information from Reuters and msnbc.com. “Finding Atlantis,” a documentary about the search for the city’s ruins, will air on Tuesday on the National Geographic Channel.’