Amazing,puzzling,are the words that come to my mind when I read about Astrophysics and Indian Cosmology.

Universe is Energy and what is Observable is not the Entire Universe.

I shall attempt to explain in a series that deal with Space,Galaxies,Expanding Universe,Matter,Antimatter,Dark Matter and Dark Energy.

( that there are many Universes with different Laws operation is another matter!)

On this scale what we know of the Universe is practically Nothing.

Universe was thought to be fixed in the sense that it was limited,though of astronomical magnitude of Numbers.

However,it was found not to be so.

The Universe is expanding.

That is No limit or Edge to the Universe.

Then Einstein came up with the the Theory of Cosmic Quotient,which means that a Fixed Number,Constant exists between the Force of Gravity that keeps Galaxies together and the Expanding Universe.

With the advent of Hubble Telescope in Space,it was demonstrated that there forces at Work that expand the Universe.

Dark Matter was theorised to exist and it,though Unobservable,can be inferred.

And Dark Energy helps in Expanding the Universe.

This diagram reveals changes in the rate of expansion since the universe’s birth 15 billion years ago. The more shallow the curve, the faster the rate of expansion. The curve changes noticeably about 7.5 billion years ago, when objects in the universe began flying apart as a faster rate. Astronomers theorize that the faster expansion rate is due to a mysterious, dark force that is pulling galaxies apart.

Image is featured at the top of the article.

A galaxy is an enormous swarm of a million to a trillion stars. The Milky Way Galaxy,(our galaxy) is medium-large, with 100 billion stars. There are about 100 billion galaxies in the known universe, so there are literally as many suns as there are sand grains on all the beaches of Earth. The nearest large galaxy (Andromeda) is 2 million light years away. When you look out into space, you are also looking back in time. You actually see Andromeda as it was 2 million years ago, because it took that long for the light to reach Earth.

It was also found that Dark Matter alone could not account for the acceleration of the Universe.

There exists a Form of Energy, called Dark Energy,that expands the Universe at a higher rate,by creating Space (!) and more Dark Energy.

‘In physical cosmology and astronomy, dark energy is an unknown form of energy which is hypothesized to permeate all of space, tending to accelerate the expansion of the universe. Dark energy is the most accepted hypothesis to explain the observations since the 1990s indicating that the universe is expanding at an accelerating rate.

As we know of very little about Dark Energy,we know very much less of its origin or its end ,if any.

To understand what is Time and Eternity, would take another article.

What do the Indian texts say on Cosmology?

The Purusha Suktha Explains that everything is from A Principle and it evolves by Matter merging or interacting with non Matter.

Brahma, representing Matter sacrifices His head in Yagnya fire to get the Universe evolved.

(Indian texts tend to give minimum three meanings for any text;one,the literal translation,the second ,it contains a scientific one and the third that explains an Abstract philosophical Truth.)

The term Vishnu is from the Word Jishnu,One That supports.

Vishnu is a Principle that supports the Universe.

Vishnu is a manifestation,am Amsa of Narayana.

He is described in various Avatars as Koorma,Tortoise,that suppots the Universe.

It may be interesting to note that all civilisations have The Tortoise Legend.

Narayana is always in Eternal Contemplation.

You may read my article on Yoga Nidra for details.

In the early 1990s, one thing was fairly certain about the expansion of the universe. It might have enough energy density to stop its expansion and recollapse, it might have so little energy density that it would never stop expanding, but gravity was certain to slow the expansion as time went on. Granted, the slowing had not been observed, but, theoretically, the universe had to slow. The universe is full of matter and the attractive force of gravity pulls all matter together. Then came 1998 and the Hubble Space Telescope (HST) observations of very distant supernovae that showed that, a long time ago, the universe was actually expanding more slowly than it is today. So the expansion of the universe has not been slowing due to gravity, as everyone thought, it has been accelerating. No one expected this, no one knew how to explain it. But something was causing it.……

Dark Energy.
We know how much dark energy there is because we know how it affects the universe’s expansion. Other than that, it is a complete mystery. But it is an important mystery. It turns out that roughly 68%of the universe is dark energy. Dark matter makes up about 27%. The rest – everything on Earth, everything ever observed with all of our instruments, all normal matter – adds up to less than 5% of the universe. Come to think of it, maybe it shouldn’t be called “normal” matter at all, since it is such a small fraction of the universe.
Albert Einstein was the first person to realize that empty space is not nothing. Space has amazing properties, many of which are just beginning to be understood. The first property that Einstein discovered is that it is possible for more space to come into existence. Then one version of Einstein’s gravity theory, the version that contains a cosmological constant, makes a second prediction: “empty space” can possess its own energy. Because this energy is a property of space itself, it would not be diluted as space expands. As more space comes into existence, more of this energy-of-space would appear. As a result, this form of energy would cause the universe to expand faster and faster. Unfortunately, no one understands why the cosmological constant should even be there, much less why it would have exactly the right value to cause the observed acceleration of the universe.

By fitting a theoretical model of the composition of the universe to the combined set of cosmological observations, scientists have come up with the composition that we described above, ~68% dark energy, ~27% dark matter, ~5% normal matter. What is dark matter?

We are much more certain what dark matter is not than we are what it is. First, it is dark, meaning that it is not in the form of stars and planets that we see. Observations show that there is far too little visible matter in the universe to make up the 27% required by the observations. Second, it is not in the form of dark clouds of normal matter, matter made up of particles called baryons. We know this because we would be able to detect baryonic clouds by their absorption of radiation passing through them. Third, dark matter is not antimatter, because we do not see the unique gamma rays that are produced when antimatter annihilates with matter. Finally, we can rule out large galaxy-sized black holes on the basis of how many gravitational lenses we see. High concentrations of matter bend light passing near them from objects further away, but we do not see enough lensing events to suggest that such objects to make up the required 25% dark matter contribution……

There are words in Indian texts to describe Snakes.

Sarpa is Snake and Naga, Serpent, Cobra and a Tribe.

(This information strengthens my view that Subrahmanya and Shiva were real life characters).

The Serpent that serves as Bed to Lord Vishnu is called Sesha and one instance has it that Vishnu had rolled it!

Sesha is Time and it is circular,can be rolled back for Time, according to Indian Thought in Cyclic and not linear.

Another meaning for Sesha is Remainder.

Sesha is Eternal,,and Adhi the First.

And as in mathematics,It Is Infinite.

And Sesha is worshipped as Sankarshana.

In the Bhagavata PuranaShesha is namedSankarshana, the tamasic energy of Lord Narayana himself, and is said to live deep within the inner layers of patala, where there are many serpents with gems on their heads and where Sankarshana is the ruler. He is said to live since before the creation of the universe. When the universe is towards its end, he creates 11 rudras from him to destroy the universe for a new one to be created.

Sankarshana is also one of the four vyuha forms of Vishnu or Krishna, the other three being Vāsudeva, Pradyumna and Aniruddha.

Sankarshana expands himself as garbhodakshayi-vishnu in the beginning of the universe to create Brahma. In other words, Lord Sankarshana is Lord Narayana himself.-. Wikipedia. 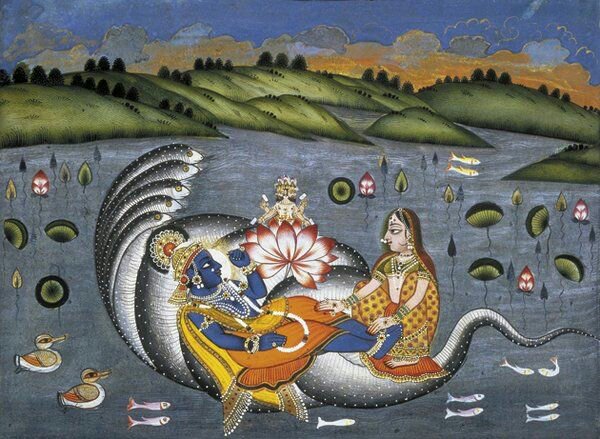 He is sometimes referred to as Ananta Shesha, which translates as endless-Shesha or Adishesha “first Shesha”. It is said that when Adishesa uncoils, time moves forward and creation takes place; when he coils back, the universe ceases to exist. He is also described in Buddhism as Vasuki.

Vishnu is often depicted as resting on Shesha. Shesha is considered a servant and a manifestation of Vishnu. He is said to have descended to Earth in two human forms or avatars: Lakshmana, brother of Rama; Balarama, brother of Krishna.

“Shesha” in Sanskrit texts, especially those relating to mathematical calculation, implies the “remainder”—that which remains when all else ceases to exist. But in Sanskrit it also means 6 shesham as the sheshanaga has been depicted to have many heads (5 to 7).

His name means “that which remains”, from the Sanskrit rootśiṣ, because when the world is destroyed at the end of the kalpa, Shesha remains as he is.