Nature behaves as has been.

We assume that,while the going is good,it would always be so.

Life ,which includes Nature,is a Cycle.

Every thing occurs in a Cycle.

So are droughts,Astronomical phenomenon and Natural calamities.

Few seconds of Earthquakes or Volcanic eruption inflict damage for thousands of years .

Man ,in his arrogance,not realising that he can not even be identified as Cosmic speck in the universe, believes ,with his pet toy,Science,he can prevent calamities and Nature.

There is something we do not know.

Hinduism understands this limitation and devised its religious systems.

There are mantras to cure diseases,to bring rainfall.

Conversely there are mantras to induce diseases and to prevent natural calamities, like flood,costing lives.

I am furnishing mantras to prevent calamities ,limit damages from rain,flood.

Basma,ashes are to be taken from the burning ghat.

Place one brick on the ground.

Draw four vertical lines on it.

Then place the other brick on it,after chanting the following mantra, 108 Times, in the image.

3.For those who know Tamil,following Hymn may be chanted 108 times.

It is by Sundarar port by Nayanar,sung at Thirupungur Temple, Tamil Nadu to stop rains. 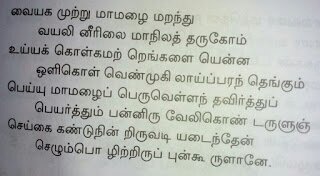 Chant the manta in the image 108 times. 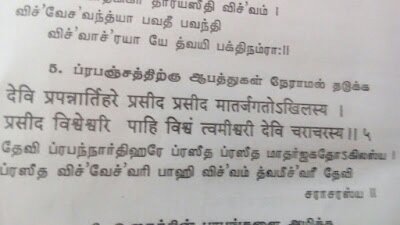