I came across articles that Chidambaram ,Tamil Nadu India is the Geo Magnetic Centre of the Earth/Universe and / center of Geo magnetic equator.

Of the branches of Physics we know very little about Magnetism.

Magnetic field study is evolving and most of them are at a theoretical stage.

As there are references to Chidambaram being the center of the Earth’s?Universe’s Magnetic Field I researched. 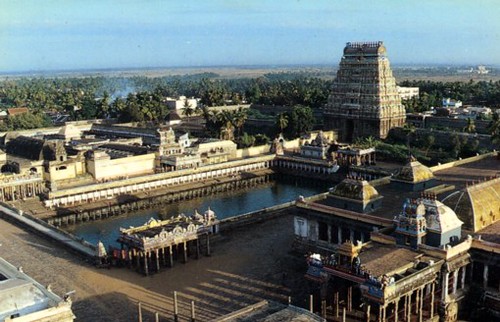 Chidambaram ,Kanchipuram and Sri Kalahasti lie in a straight line at 79* 41 East Longitude.

Curious as these happen to be among the Panchabhuta Sthalas, Places of Five Elements, Earth, Water, Fire, Air and Ether.

Earth is surrounded by Space and Air.

Ans Vishnu’s Nabhi, Navel of Vishnu has been validated as the  Center of Our Galaxy.

The Southern Cross and Canopus tally with Trishanku Swarga and Agasthya Star respectively.

Hence I did not want to dismiss the point that Chidambaram being the Centre of earth’s /universe’s Magnetic field.

A magnetic field is the magnetic effect of electric currents and magnetic materials. The magnetic field at any given point is specified by both a direction and a magnitude (or strength); as such it is a vector field.[nb 1] The term is used for two distinct but closely related fields denoted by the symbols B and H, where H is measured in units of amperes per meter (symbol: A·m−1 or A/m) in the SI. B is measured in teslas (symbol:T) and newtons per meter per ampere (symbol: N·m−1·A−1 or N/(m·A)) in the SI. B is most commonly defined in terms of the Lorentz force it exerts on moving electric charges.

Magnetic dip results from the tendency of a magnet to align itself with lines of force. As the Earth’s magnetic lines of force are not parallel to the surface, the north end of a compass needle will point downward in the northern hemisphere (positive dip) or upward in the southern hemisphere (negative dip). The range of dip is from −90 degrees (at the South Magnetic Pole) to +90 degrees (at the North Magnetic Pole). Contour lines along which the dip measured at the Earth’s surface is equal are referred to as isoclinic lines. The locus of the points having zero dip is called the magnetic equator or aclinic line.’

And Shiva personifies Motion and Rhythm as expressed in His Cosmic Dance.

Can there be any link?

I found that Equatorial Geophysical Research Laboratory (EGRL), the regional centre of IIG, is at Thirunelveli  because,

‘ Situated close to the magnetic equator (the dip angle being 1.75oN) (8.7oN, 77.8oE geographic) over an area of more than 35 acres near the village, Krishnapuram, the Centre was intended to house multi-disciplinary experiments for the measurements of electric and magnetic fields originating in the near-Earth environment.’

I surmise that there is some truth in the statement that Chidambaram being the Centre of Magnetic Field.

To who assert Magnetic Fields do not have Equator..

I am reproducing a study on this subject.

Note that there is an an Anamoly in SE Asia .

One might remeber that the present location of the South and for that matter the Indian Sub Continent was further down south about 255 Millin years ago.

And the present Chidambaram might have been located there.