The Ramayana mentions about 196 places visited by Lord Rama.

These places are found even today in various parts of India.

Rama traveled by foot for about 2000 miles through the length and breadth of India.

This consists of his trek with Viswamitra towards Mithila, where he married Sita.

Enroute he, along with Lakshmana, his brother defended the Yagna of Sage Viswamitra. 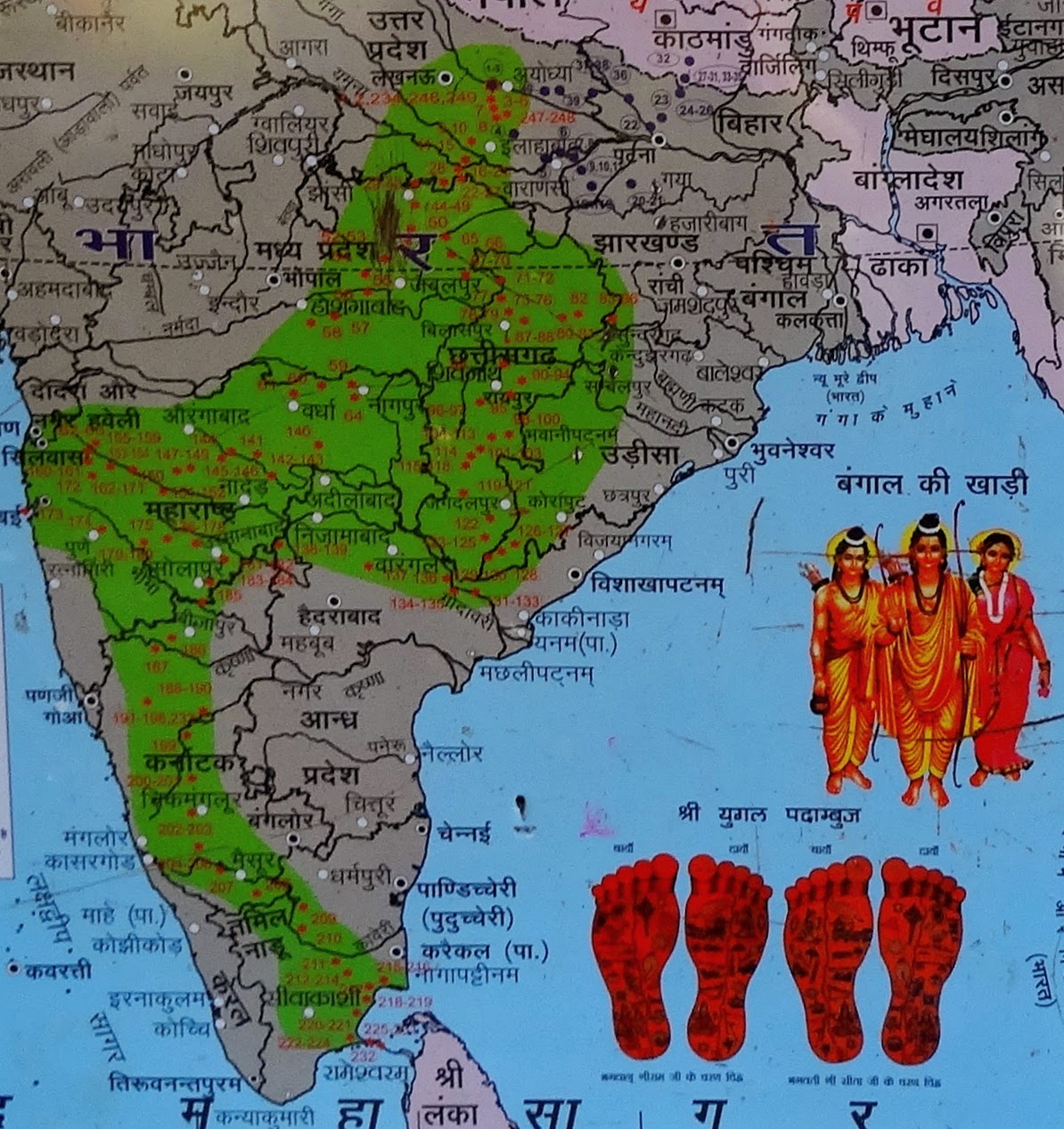 Earlier Viswamitra demanded of King Dasaratha to send Rama and Lakshmana with him to defend the Yagna that was being disturbed by Rakshaasas.

Sage Vasishta advised Dasaratha, who was nervous about sending young boys to fight against the Demons,that whatever Viswamitra is planning it would result only in the welfare of Lord Rama.

Viswamitra took th boys along and initiated them the Two Mantras,Phala and Athiphala, the former to ward of hunger, the latter to prevent sleep and grant vigour.)please read my Post on these Mantras)

Vishwamitra and the two princes came to Tataka’s forest and the sage ordered Rama to kill the demoness to free the area from her terror. Rama was hesitant to kill her as she was a woman and initially maimed her, chopping off her hands so that she could not attack him further. Using her demonic powers, she changed form, disappeared and continued to attack them whilst remaining unseen. Sage Vishwamitra advised Rama, that as a prince, he had to carry out his duty regardless of his own personal reservations about killing a woman. Rama swiftly pierced her heart with his arrows. This act gained the young princes the blessings of not just Vishwamitra but also the blessings of all of the assembled sages in the yagnashala.
Tadka Vadh – Buxar, Bihar: After crossing the holy Ganga, Shri Ram and Lakshman reached a dense forest where demoness Tadka lived. The dreadful forest was known as Tadkavan. Shri Ram ended Tadka’s reign over the forest by slaying her and freeing its inhabitants from terror. The forest stretched between Bharoli and Baksar in Bihar. Shri Ram performed the first task of his “avtaar” (incarnation) here by destroying the evil demoness.

Before reaching Charitra vana, Viswamitra along Rama and Lakshmana stayed in Hajipur,where a statute of Lord Rama is found along with his foooprints,

Haji Shamshuddin, king of Bengal erected a mosque in Hajipur .

He also established Hajipur as his capital.

Raja Thodarmal also lived here.
Siddhashram: Buxar, Bihar: Rishi Vishwamitra’s Siddhashram was located not too far from Baksar. Siddhashram, according to Adhytma Ramayan was a social ashram where religious instruction was imparted to people. Shri Ram and Lakshman sojourned in the ashram for three days after Shri Ram killed Mareech and Subahu, the demons who were tormenting Rishi Vishwamitra by dirtying his Yagna (fire sacrifice) with bones and blood. Lakshman destroyed an entire demon force brought by Subahu while Shri Ram took on the mightY Mareech, son of Tadka, the demoness he had done away with earlier. There are villages existing today on the banks of the River Ganga with the names Mareech and Subahu.

Ahilya Uddhar – Ahroli, Buxar, Bihar: Three kilometers from Buxar in the northern direction is the village Ahroli. Rishi Gautam had his ashram here.

According to Ram Charita Manas it was here that Shri Ram delivered Ahilya, the beautiful wife of Rishi Gautam, from a curse of her husband, which had turned her into stone. When Shri Ram and Lakshman left Siddhashram they crossed River Ganga and River Sonbhadra and set foot on the soil of Ahroli village, which still exists in Buxar district.

Every year, on the 18th day of Pausha month (Dec/Jan), a large number of people throng to Ram Rekha Ghat for Makar Sankranti fair. Popularly known as Khichari mela, the fair draws thousands of people who come to the ghat to take bath in the Ganges.