I have written on Indian temples which baffle science.

There are temples where the Shiva Linga changes colors five times daily,Ganesha remains black during the fifteen days of the waning moon, Krishna and white during waxing moon, Shukla Paksha,where in the same temple water in the temple tank remains black and white according to Shula Paksha and Krishna Pakshsa,Temple where Vishnu idol looks like make when seen in front and female when looked from behind, Narasimha idol which gobbles up fifty percent of Jaggery water irrespective of the Vessel from which it is drawn and throws it up,the atomic composition of Palani Subrahmanya is not known… 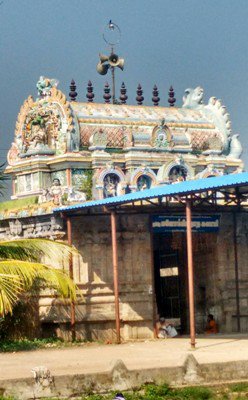 There is yet another temple where the Shiva Linga absorbs entire Oil when abhisheka is performed.

‘This sivasthalam temple is located 13 Kms from Kumbakonam. The temple is located on the road side at Tiruneelakudi on the Kumbakonam – Karaikkal road. From Mayiladuthurai, travel upto Aduthurai on the way to Kumbakonam, and then take a branch road from there to reach Thiruneelakkudi (3 Kms. from Aduthurai).

Another unique feature is that the Bilva leaves here have five petals instead of three!

‘(திருநீலக்குடி நீலகண்டேஸ்வரர் கோயில்) is a Hindu temple located at Thanjavur district of Tamil Nadu, India. The historical name of Tiruneelakkudi is Thennalakudi . The presiding deity is Shiva. He is called as Neelakandeswarar. His consort is Oppilamulaiyal.